Farmers who have been agitating for the repeal of agricultural laws for several months now will seek their "revenge" in the upcoming Assembly election, Shiromani Akali Dal (SAD) leader Harsimrat Kaur Badal on Thursday. 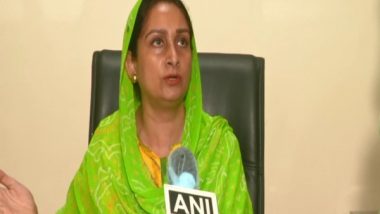 New Delhi [India], July 22 (ANI): Farmers who have been agitating for the repeal of agricultural laws for several months now will seek their "revenge" in the upcoming Assembly election, Shiromani Akali Dal (SAD) leader Harsimrat Kaur Badal on Thursday.

"If the government only understands the politics of votes, then the farmers will definitely seek revenge in terms of voting," she told ANI.

According to her, the agitation began in Punjab and spread to Haryana, Uttar Pradesh and Rajasthan. "The more they delay the decision, the more it will spread across the country," SAD leader said.

She further asked, "What is government's compulsion which is stopping them from scrapping the farm laws, but they are however ready to insult the farmers and the country?"

During the ongoing Monsoon Session of Parliament, farmers arrived in buses from Singhu border point to hold a protest at Delhi's Jantar Mantar. They also held a 'Kisan Sansad' at the site.

"It is an insult of the farmers. The government did not care when farmers were protesting at the borders of Delhi. Now that they are protesting within the national capital, they could have sent somebody to at least understand and discuss the matter," said Badal.

Narendra Singh Tomar on Thursday said the government is ready to discuss the matter with the farmers if they express their views about the laws point-wise.

However, Badal emphasised that the government is not willing to take the laws back.

"Has the government made any commitments to corporates about the laws? What is the reason for not taking them back?" she questioned.

So far, several rounds of talks have been held between the Centre and farmer leaders to break the deadlock between the two parties.

Farmers have been protesting on the different borders of the national capital since November 26 last year against the three newly enacted farm laws: Farmers' Produce Trade and Commerce (Promotion and Facilitation) Act, 2020; the Farmers Empowerment and Protection) Agreement on Price Assurance and farm Services Act 2020 and the Essential Commodities (Amendment) Act, 2020. (ANI)