Get latest articles and stories on India at LatestLY. A show-cause notice has been issued to four police personnel on Monday in connection with the alleged secret meeting between ex-Mumbai Police Commissioner Param Bir Singh and dismissed Mumbai Police officer Sachin Waze after hearing before Chandiwal Commission in November 2021. 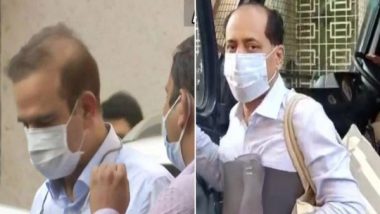 As per the Navi Mumbai Police, the alleged secret meeting continued for two and a half hours, following which, charges of ignoring protocols and rules were levelled against Waze's escort.

An enquiry of the same was conducted against a sub-inspector and three constables of Waze's escort.

Both Deshmukh and Waze are in judicial custody in separate cases of the National Investigation Agency (NIA) and the Enforcement Directorate (ED), respectively.

In a letter to CM Thackeray in March this year, Singh had alleged that Deshmukh was involved in several wrongdoings, including asking Sachin Waze to collect Rs 100 crore from bars and restaurants in Mumbai. (ANI)