Amid rainfall, high tide was witnessed in the Marine Drive area in Mumbai on Thursday. 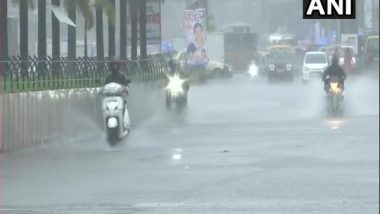 Mumbai (Maharashtra) [India], July 22 (ANI): Amid rainfall, high tide was witnessed in the Marine Drive area in Mumbai on Thursday.

India Meteorological Department (IMD) states that the city and suburbs might witness moderate to heavy rainfall/thundershowers. Spells of heavy rainfall are expected at some isolated places.

Several parts of Mumbai were waterlogged on Thursday morning as the heavy rainfall continued overnight in the city.

It stated that the train service between Igatpuria and Khardi was temporarily stopped due to waterlogging.

IMD had earlier placed Mumbai on a "yellow alert" after it predicted intense to very intense rains in Mumbai, Palghar, Thane and Raigar districts on Wednesday. (ANI).