Villagers in three panchayats in Himachal Pradesh's Kinnaur district boycotted the bypoll to the Mandi Lok Sabha seat on Saturday in protest against the construction of a hydro-electric project, which they claimed will adversely affect the environment. 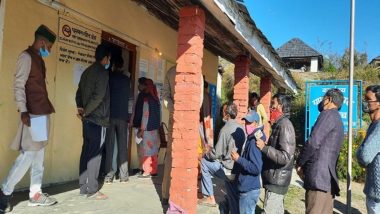 Kinnaur, October 30: Villagers in three panchayats in Himachal Pradesh's Kinnaur district boycotted the bypoll to the Mandi Lok Sabha seat on Saturday in protest against the construction of a hydro-electric project, which they claimed will adversely affect the environment.

The bypolls to the Mandi parliamentary constituency was held along with bye-elections to the Fatehpur, Arki and Jubbal-Kotkhai assembly seats in the state. Also Read | Shirur Vidhan Sabha Constituency in Maharashtra: Sitting MLA, Candidates For Assembly Elections 2019, Results And Winners.

Kinnaur Deputy Commissioner and District Election Officer Apoorv Devgan told PTI that no voter in the three panchayats cast their vote till 5 pm. Data after 5 pm is still awaited, he added. There are 1,080 voters in Rarang panchayat, over 500 voters in Jangi panchayat and over 298 voters in Aakpa panchayat. Also Read | Odisha BSE 10th Result 2019 Not Today: Class 10 Board Exam Scores to Be Declared Soon Online at bseodisha.ac.in; Here's List of Website to Check Marks.

The decision to boycott the bypoll was taken to protest the construction of the Jangi Thopan Powari Hydro-Electric Project, villagers said and claimed that the project will adversely affect the environment of the area.

The villagers said that four people cast their vote at Rarang panchayat's Aryan polling station. But they are not "permanent residents" of the area, they claimed.

The villagers said that the government has not paid any heed to their objections to the project and therefore, the decision to boycott the bypoll had to be taken. People were left with no other choice, they said.

Members of the Dafla Sports Club in Kanam village also did not cast their vote in support of the three panchayats boycott call, the villagers said. The Mandi seat fell vacant after the death of BJP MP Ram Swaroop Sharma. He was found dead at his official residence in Delhi on March 17.

The Mandi bypoll saw a direct contest between Pratibha Singh of the Congress and Kargil war hero Brigadier Khushal Chand Thakur of the BJP.

Besides them, Ambika Shyam of the Rashtriya Lokniti Party, Munshi Ram Thakur of the Himachal Jankranti Party and independent candidates Anil Kumar and Subhash Mohan Snehi are also in the fray in the Mandi bypoll.