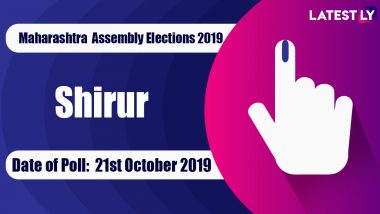 Maharashtra, the biggest state in Western India, is considered one of the politically most crucial provinces in the country. The state witnessed a saffron surge in 2014, 15 years after being ruled under a coalition regime led by Congress-Nationalist Congress Party (NCP) combine. Maharashtra also houses the mega city of Mumbai -- considered to be the financial capital of the nation. Who Will Win Maharashtra Assembly Elections 2019? Here's What ABP News Opinion Poll Results Predict.

The new government in Maharashtra should be formed before November 9 because the current assembly expires on that day. Pollsters are of the opinion that the incumbent ruling alliance of Shiv Sena-BJP would return to power with a resounding mandate.

(The above story first appeared on LatestLY on Oct 12, 2019 06:44 AM IST. For more news and updates on politics, world, sports, entertainment and lifestyle, log on to our website latestly.com).