Clein said the reality on the ground will determine whether the ceasefire holds or not. 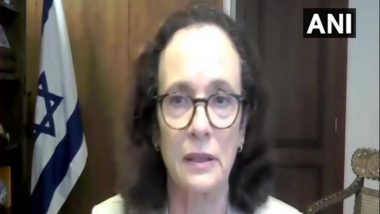 New Delhi, May 21: Israel has hit Palestinian militant group Hamas "very hard" in the Gaza Strip as it successfully struck hundreds of targets including military and intelligence infrastructure and underground tunnels of the outfit in the last few days, a senior Israeli diplomat said on Friday.

Rony Yedidia Clein, the Deputy Chief of the Israeli embassy, said the US and several other countries provided full support to Israeli's action while India had an understanding of it.

Both Israel and Hamas agreed on a ceasefire that has come into effect on Friday after 11 days of intense fighting in which around 230 people were killed in Gaza and 12 in Israel. Clein said the reality on the ground will determine whether the ceasefire holds or not.

Referring to the Israeli bombing in the Gaza Strip, she said it was a "very successful campaign" in handing the Hamas a "crushing blow", and asserted that every country has the right to defend its sovereignty.

The deputy chief of the mission said many senior commanders of Hamas including its brigade commander for Gaza city and the head of cyber division were killed in Israeli strikes, dealing a "crushing blow" to the group.

"We hit the terrorist organisation in the Gaza Strip very hard. We hit hundreds of targets of military and intelligence infrastructure of Hamas quite severely. In terms of our achievements, we were able to do quite a bit," Clein told reporters. Clein said Gaza could have been a Singapore of the Middleeast if there was a progressive agenda for its development, alleging that Hamas turned it into a "terrorist base".

"I believe the past 10 days have shown Hamas that it's not worth firing at Israel and they paid a heavy price for their aggression," she said. Clein also referred to the killing of Indian national Soumya Santosh in a rocket attack from Gaza on May 11. Santosh hailed from Kerala's Idukki district and worked as a caregiver in the southern Israeli city of Ashkelon.

The diplomat said Israeli people considered her to be one of their own and that her family will receive compensation by the national insurance institute of Israel. India has been calling for the resolution of the conflict through talks.

At the UN General Assembly, India underlined that every effort should be made to create conducive conditions for the resumption of direct talks between Israel and Palestine. China Offering Cash, 200,000 COVID-19 Vaccine Doses to Palestinians in Gaza.

"We urge that any action that exacerbates tensions should be avoided, as also any attempt to unilaterally change the status quo," India's Permanent Representative to the UN Ambassador T S Tirumurti said at the UN General Assembly meeting on the situation in the Middle East and Palestine.