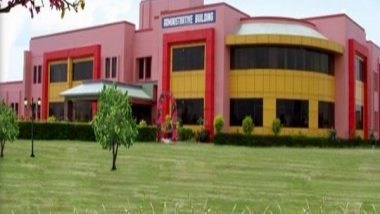 Speaking on the occasion, Prof Sharma laid emphasis on planting more trees during the annual Van Mahotsav festival to mitigate the climate change effects and protection of the environment.

He stressed that only planting would not suffice the progamme but proper aftercare till establishment should be the norm.

Rajendera Prasad, DIG, Central Reserve Police Force, Jammu Range who was Guest of Honour in the function, planted a sapling of Peela Amaltas. KD Joshi, Commandant, CRPF also graced the occasion by planting bottle brush.DIG Prasad said that this plantation is a part of the Central Armed Police Forces (CAPFs) Nationwide Tree Plantation drive towards green India under the flag of the Ministry of Home affairs.

He further told that about one lakh saplings of different tree species will be planted during the ensuing monsoon season to make the Jammu region greener.Statutory officers of the University, Officers of the CRPF, faculty members, non-teaching staff, CRPF personals, students and residents of university campus planted saplings of bottle brush, Peela Amaltas, Kaner, Neem, Drek, Senna, Siris, Arjun and Amla on the occasion. (ANI)