In this Satyagraha, we all have to support the annadata of the country." 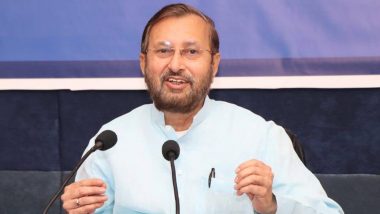 Chennai, December 26: Hitting out at the opposition leaders for criticising the three farm laws, Union Minister Prakash Javadekar has challenged Congress leader Rahul Gandhi and the Dravida Munnetra Kazhagam (DMK) for an open debate on whether the farm reforms introduced by the Centre are in the interest of farmers or not.

"Rahul Gandhi suddenly said you will (Centre government) have to withdraw the new farm laws. I am giving him an open challenge for a debate, whether the laws are good, in the interest of farmers or not. I am giving challenge to Rahul Gandhi and Dravida Munnetra Kazhagam (DMK) to debate," Javadekar said while addressing farmers in Chennai. Rahul Gandhi Posts Video of Protesting Farmers on Social Media, Says ‘Govt Will Have to Listen to the Farmers Agitating Against Farm Laws’.

Rahul Gandhi on Thursday called the farmer protests a 'Satyagraha' and urged the people to support the farmers agitating against the three farm laws passed by the Central government.

Citing a media report alleging the new laws used to dupe farmers, Rahul Gandhi had tweeted: "Farmers in India are agitating against anti-agricultural laws to avoid such a tragedy. In this Satyagraha, we all have to support the annadata of the country."

The 'Delhi Chalo' farmers' protest along Delhi's borders has entered the 31st day on Saturday. Meanwhile, several rounds of talks between ministers and farmers' leaders have failed to produce a breakthrough so far.

Hundreds of farmers have been protesting against the Farmers' Produce Trade and Commerce (Promotion and Facilitation) Act, 2020, the Farmers (Empowerment and Protection) Agreement on Price Assurance and Farm Services Act, 2020 and the Essential Commodities (Amendment) Act, 2020.