Uttarakhand government on Saturday allowed states to take 'Ganga jal' from Haridwar in water tankers days after the state government cancelled the Kanwar Yatra in light of COVID-19. 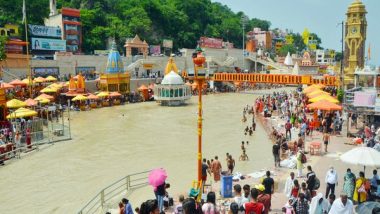 Dehradun, July 17: Uttarakhand government on Saturday allowed states to take 'Ganga jal' from Haridwar in water tankers days after the state government cancelled the Kanwar Yatra in light of COVID-19.

Additional Chief Secretary Anand Vardhan said that if there is a demand for carrying 'Ganga jal' from the states, then the state government will give full cooperation. "Permission will be given to carry 'Ganga jal' from Haridwar through water tankers," he added. Kanwar Yatra 2021: Supreme Court Asks Uttar Pradesh Govt to Reconsider Its Decision to Allow Kanwar Yatra.

On Tuesday, the Uttarakhand government cancelled Kanwar Yatra this year. Haridwar Police has said that Kanwariyas will not be allowed to enter Haridwar and the border will also be sealed.

The Kanwar Yatra, in which Shiva devotees from northern states travel on foot or by other means to collect water from Ganga in Haridwar to offer it at Shiva temples in their areas, is set to begin from July 25.

Earlier, the Central government also filed an affidavit before the Supreme Court and said that state governments must not permit the movement of 'Kanwariyas', however, considering the age-old customs and religious sentiments attached, States must develop a system to make 'Ganga Jal' available through tankers at designated locations.

The top court was hearing a case where it took suo motu cognizance of the decision of the Uttar Pradesh government to allow Kanwar Yatra amid COVID-19 and asked the Centre, Uttar Pradesh and Uttarakhand to clarify their stand on the issue.

On Friday, Solicitor General Tushar Mehta appearing for Centre told the top court that as far as the Kanwar Yatra is concerned, the State Governments "must not" permit movement of 'Kanwariyas' for bringing Ganga Jal from Haridwar to the Shiv temples to do 'Abhishekam' in the local Shiv Temples view of COVID-19 crisis.