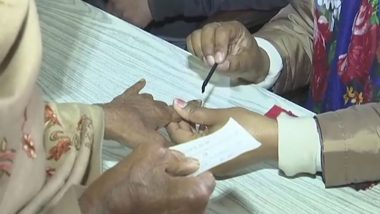 The scrutiny of nominations will take place on Saturday. The last date for withdrawal of candidature is October 19 and the results will be declared on November 10.

The Sira byelection for Sira in Tumakuru district was necessitated following the death of JD(S) legislator B Sathyanarayana in August, while the R R Nagar seat here fell vacant following the disqualification of the then Congress MLA N Munirathna under the anti defection law last year. UP Bypolls 2020: BJP Names Chetan Chauhan's Wife Sangeeta Chauhan as Candidate for Uttar Pradesh By-Election.

While Congress has fielded Jayachandra, a former Minister, who had represented Sira in the past, as its candidate, the JD(S), with an eye on sympathy votes, has fielded Ammajamma, the wife of late Sathyanarayana, as the candidate.

She is pitted against V Krishnamurthy of JD(S) and N Munirathna of the BJP.

Munirathna, after his disqualification last year, had jumped ship to BJP.

A total number of 2,15,693 eligible voters are expected to cast their votes at about 330 polling stations in Sira on November 3.

Three categories of voters will be allowed to vote through postal ballot, including those aged above 80, persons with disabilities flagged in the electoral roll and COVID-19 suspects or affected persons, the office of the Chief Electoral Officer Karnataka had said in an earlier release.