Get latest articles and stories on India at LatestLY. Local residents of Shaheen Bagh in the national capital protested as bulldozers rolled into the area for an anti-encroachment drive conducted by the South Delhi Municipal Corporation (SDMC). 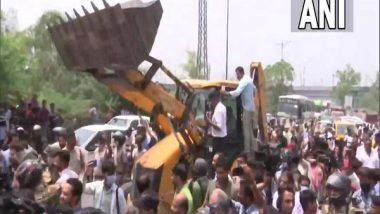 New Delhi [India], May 9 (ANI): Local residents of Shaheen Bagh in the national capital protested as bulldozers rolled into the area for an anti-encroachment drive conducted by the South Delhi Municipal Corporation (SDMC).

Locals were seen sitting on the roads and stopping the bulldozers as the demolition drive began with assistance provided by Delhi Police.

Also Read | The Illegal Encroachment, an Iron Structure in Front of a Building, Was Manually Removed … – Latest Tweet by IANS India.

"We have gathered here to stop the bulldozers. If the government is talking about encroachment, were they not able to see the encroachment for 15 years? Why was the MCD and government sleeping for so long? Now when the MCD tenure is ending on May 18, they recall that there is encroachment," said a social worker.

The Chairman of the SDMC's standing committee (central zone) said that the municipality will do its work and the bulldozers have been organised for the purpose.

"Our workers and officials are ready. Teams and bulldozers have been organised. Encroachments will be removed wherever they are be it in Tughlakabad, Sangam Vihar, New Friends Colony or Shaheen Bagh," the chairman said. (ANI)