Get latest articles and stories on India at LatestLY. Amid the continuing political crisis in Maharashtra, Governor Bhagat Singh Koshyari wrote to the state Director General of Police (DGP) to provide security to the MLAs of Eknath Shinde camp and their families on an immediate basis. 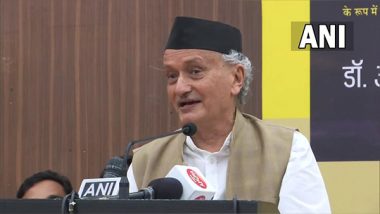 Mumbai (Maharashtra) [India], June 26 (ANI): Amid the continuing political crisis in Maharashtra, Governor Bhagat Singh Koshyari wrote to the state Director General of Police (DGP) to provide security to the MLAs of Eknath Shinde camp and their families on an immediate basis.

"I have received a representation dated 25 June 2022 from 38 MLAs, of Shiv Sena, 2 MLAs of Prahar Jan Shakti Party and 7 Independent MLAs stating that the police security of their families has been illegally and unlawfully withdrawn," the Governor said in his letter to DGP.

"They have also raised serious concerns about the safety of their homes and families in the context of the provocative and threatening statements being made by certain political leaders," Koshyari said.

Already, offices and homes of some of the MLAs have been vandalised with the police being a mute spectator, he added.

"I, therefore, direct you to provide adequate police protection to the MLAs, their families and homes on an immediate basis," the Governor said.

Meanwhile, rebel Shiv Sena leader Eknath Shinde has called a meeting of MLAs camping with him at a hotel in Assam's Guwahati on Sunday to discuss the strategy ahead.

The political turbulence in Maharashtra was triggered by the faction war in Shiv Sena after Minister Eknath Shinde flew to Surat with some MLAs and then to Guwahati where he claims of having the support of 38 MLAs of the 55 Shiv Sena legislators, which is more than two-thirds of the party's strength in the 288-member Maharashtra Legislative Assembly.

It means that they can either leave and form another political party or merge with another without being disqualified from the state assembly.

According to sources, Maharashtra deputy speaker Narhari Zirwal has sent notices to the 16 Shiv Sena rebel MLAs. The MLAs have to be present in Mumbai on Monday for the hearing of disqualification.

Zirwal also turned down the Shinde camp's suggestion to appoint rebel Shiv Sena MLA Bharat Gogawale as the chief whip of the legislature party in place of Sunil Prabhu.