Union Minister for Health and Family Welfare Mansukh Mandaviya on Sunday said the Central government will soon launch the 'One Nation, One Dialysis' programme, under the Pradhan Mantri National Dialysis Programme. 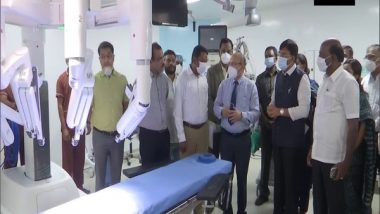 Chennai, June 26: Union Minister for Health and Family Welfare Mansukh Mandaviya on Sunday said the Central government will soon launch the 'One Nation, One Dialysis' programme, under the Pradhan Mantri National Dialysis Programme.

Through this scheme, any patient can get to the dialysis facility from anywhere in the country.

The Union Minister is on a two-day visit to Tamil Nadu and Puducherry. He visited and observed the robotic surgery machine installed at the Tamil Nadu Government Multi Super Speciality Hospital in Chennai.

According to an official release, Mandaviya also virtually laid the foundation stone of CGHS Wellness Centre and Lab at Avadi.

Further, he interacted with trauma care patients and those with severe sports injuries who are being treated with advanced tech-based surgeries and biopharma therapies at the Multi Super Speciality Hospital.

Addressing the gathering, Mandaviya said the Tamil Nadu Government Multi Super Specialty Hospital is the only centre with 2 surgeon consoles and congratulated the state for achieving the goal set for MMR and IMR well ahead of the rest of the states.

Covering 1.58 crore families in Tamil Nadu, under the Ayushman Bharat Yojana, 75 lakh people have availed of the benefits, he added.

Stating that the COVID-19 vaccination status in the Southern state has reached 11 crores 26 lakh doses with 94 per cent being first doses and 82 per cent comprising of second doses, the Minister mentioned it as a commendable feat.

Speaking about the Nikshay Mitr Abhiyan a TB Patient/Village Adoption' scheme, he said around 50,000 patients suffer from TB in Tamil Nadu.

However, he appealed to the people to extend their support to this scheme as only 5 per cent of them have given consent, while 35 per cent have not accepted it as yet.

"Only with your support, like in COVID, can we overcome together this hurdle to the nation's progress," he reiterated.

Mandaviya expressed happiness that 17 districts of the state have recorded zero cases of Malaria and lymphatic filariasis has been fully eradicated in Tamil Nadu. Even though this is encouraging progress, the health Minister directed the health officials to stay alert and continue taking necessary actions toward the eradication of Malaria, Chikungunia and Dengue.

"The dynamic leadership of Prime Minister Narendra Modi is not just visionary but filled with empathy. We are committed to making the nation Malaria Free by 2030," he said.

Till now, 542.07 lakh (upto March 2022) screening tests have been done in these centres for Hypertension, Diabetes, Common cancers etc, he added.