Get latest articles and stories on India at LatestLY. A female died after a massive fire broke out in a building near Mundka metro station on Friday evening, the police said. 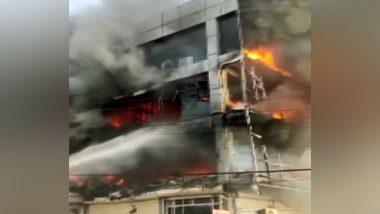 Visual from the spot near Mundka metro station (Photo/ANI)

New Delhi [India], May 13 (ANI): A female died after a massive fire broke out in a building near Mundka metro station on Friday evening, the police said.

According to Delhi police, a PCR call was received at 4.45 pm in the Police Station, Mundka regarding the fire incident following which local police immediately rushed to the spot.

On preliminary enquiry, it was found that it is a three-story commercial building generally used for providing office space for companies, the police said.

The fire was initiated on the 1st floor of the building which is an office of a CCTV cameras and router manufacturing company. The owner of the company is in police custody.

"One casualty has been reported in the incident and efforts are being made to control the situation," the police said.

Further, there are a total of nine fire brigades present at the spot and an ambulance facility is also available for providing immediate medical assistance to the victim, it added. (ANI)