After the Opposition created ruckus, the Lok Sabha has been adjourned for the second time on Thursday. 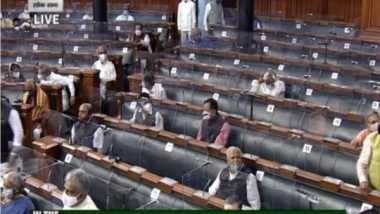 New Delhi [India], July 22 (ANI): After the Opposition created ruckus, the Lok Sabha has been adjourned for the second time on Thursday.

It has been adjourned till 2 pm soon after resumption at 12 noon.

Meanwhile, the Rajya Sabha has also been adjourned till 2 pm today.

Earlier, Rajya Sabha and Lok Sabha have been adjourned till 12 noon today.

The Parliament was resumed on the third day of the Monsson session on Thursday morning. Soon after starting the business, there has been uproar by the Opposition leaders over the farmers' agitation, Pegasus Project, inflation and other issues.

The Monsoon Session began on a stormy note on Monday amidst uproar from Opposition parties who did not allow Prime Minister Narendra Modi to introduce newly-inducted Union ministers to the Parliament. (ANI)