BJP MLC AH Vishwanath on Friday claimed that most party leaders, who met BJP general secretary Karnataka in-Arun Singh, feel that leadership in state should be changed otherwise the party shall neither survive nor come back to power. 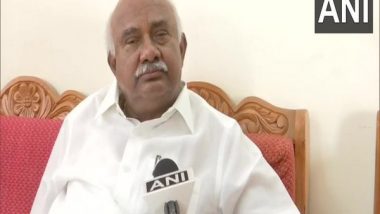 Bengaluru (Karnataka) [India], June 18 (ANI): BJP MLC AH Vishwanath on Friday claimed that most party leaders, who met BJP general secretary Karnataka in-Arun Singh, feel that leadership in state should be changed otherwise the party shall neither survive nor come back to power.

His remarks came two days after Arun Singh said there are no differences among party members and the Bharatiya Janata Party stands united amid speculations of leadership change in the state.

Speaking to ANI, Vishwanath alleged that Chief Minister BS Yediyurappa's son Vijayendra seems to be involved in all the state departments and people are talking about his corruption.

"I have already spoken to the party in charge before on issues concerning the functioning of government, party, transparency and our responsibility towards people. There's corruption. His (CM) son, Vijayendra seems to be involved in all the state departments. The public is talking about intervention and corruption of his son."

"They (leaders who met Arun Singh) are not saying it openly. Yesterday more than 80 per cent who met him said that leadership (in state) must be changed otherwise party won't survive and we won't come back again (to power). Many leaders, even ministers, said this," said the BJP MLC.

Arun Singh, who is on a three-day visit to the state, met BJP MLAs on Thursday amid murmurs of a stir in Karnataka's BJP unit.

Meanwhile, Karnataka Deputy Chief Minister and BJP leader CN Ashwathnarayan refuted Vishwanath's allegations and said that the issue of leadership in the state has already been addressed by the BJP's National general secretary and party president.

"There's nothing like that. The national general secretary, party president have addressed this issue (leadership change in state). We don't have to talk about this time and again. The concerned national leadership and state leadership will look into it," said Ashwathnarayan.

On June 16, BJP national general secretary Arun Singh held a meeting with Chief Minister BS Yediyurappa in Bengaluru on Wednesday. Besides Yediyurappa, other Karnataka ministers were also present in the meeting chaired by Arun Singh at the BJP office in the state capital.

"There are no differences in the party and we are united. Commendable work is being done under Chief Minister Yediyurappa's leadership. This meeting was only to strengthen the party, to promote good governance and schemes of the central government to the ground level. Nothing else was discussed," Arun Singh had said.

Earlier, several BJP MLAs and ministers had demanded that Yediyurappa should step down as chief minister. State Tourism Minister CP Yogeeshwara in a statement had said that instead of the Chief Minister, his son has been ruling and controlling the Ministries of Karnataka.