Get latest articles and stories on India at LatestLY. An Indian fishing boat, Al Kirmani, has been apprehended by Pakistan Maritime Security Agency, as per government sources. 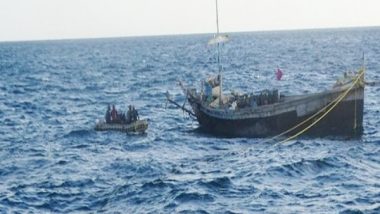 New Delhi [India], May 14 (ANI): An Indian fishing boat, Al Kirmani, has been apprehended by Pakistan Maritime Security Agency, as per government sources.

The boat had eight crew members when it was captured near India's maritime boundary with Pakistan late Friday night.

Reports about firing by Pakistani agencies on Indian fishermen are being ascertained, added the government sources.

On May 4 Border Security Force (BSF) seized one Pakistani fishing boat from the Harami Nala area in Gujarat's Bhuj.

A thorough search of the seized boats was carried out and nothing suspicious was found from the boat apart from fish, fishing nets and fishing equipment.

On May 2, A team of Gujarat ATS and the Indian Coast Guard intercepted a boat namely 'Al Hajj' within 14 nautical miles from IMBL in the coastal waters of India and seized heroin worth Rs 280 crore.