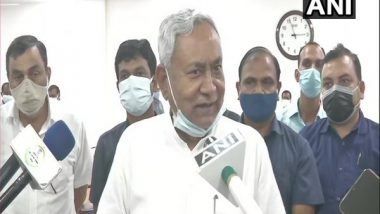 While Opposition parties have mounted an attack on the central government pressing it to conduct a discussion on the issue in Parliament, this is the first time that an ally of the BJP has demanded an investigation into the scandal. JD(U) is a coalition partner of the ruling National Democratic Alliance at the Centre.

Addressing reporters in Patna, the Bihar Chief Minister also echoed the Opposition's demand for a discussion on the issue in the ongoing Monsoon Session of Parliament.

He said that people know only what's been said in the Parliament and what the media is showing, but to know the whole truth, the matter should be probed.

"In today's time, people can misuse technology. There should be a probe so that this can't be misused to exploit anybody. If the Opposition is demanding discussion for so many days, then there should be a discussion on the matter," Nitish Kumar said.

Meanwhile, both houses of the Parliament were adjourned for the day amid the Opposition's demand over discussion on the alleged use of Pegasus spyware to snoop on journalists, politicians and other eminent personalities. (ANI)