The district administration has started preparing for the possible locust attack in the city, as the swarm has already arrived at Jhansi, Uttar Pradesh. 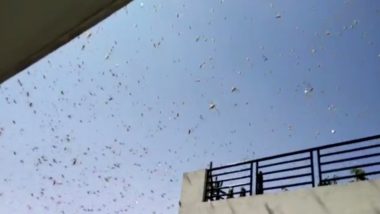 Prayagraj, May 31: The district administration has started preparing for the possible locust attack in the city, as the swarm has already arrived at Jhansi, Uttar Pradesh.

"The swarm of locust flying from Rajasthan, Madhya Pradesh, has reached Uttar Pradesh. District Authority and State government are prepared to control the attack of locust and have warned people. We have also trained the farmers about how to save their crops," said Dr Sunil Kumar Singh, District Agriculture Officer.

There are three major regions- Dausa in Rajasthan, Jhansi in Uttar Pradesh, Chattarpur district of Madhya Pradesh, where the locusts have attacked predominately. Locust Attack in Madhya Pradesh: Farmers in Sehore Beat Utensils to Keep Insects at Bay.

"The swarm of the locust is expected to spoil the crops and trees of the region to a great extent. In the wake of possible locust attack in the city, we have tested the machines and now we are prepared to deal with it," said Ajay Kumar Sharma, member of the team fighting against the locust attack.

"Agricultural officer of the district has requested us to prepare the equipment ahead of the expected attack. Following that, we have sanitised the city," said Sharma.

Ravinder Kumar Mishra, Chief Fire Officer said," The swarm of locust had reach Jhansi 3-days ago. We have prepared our firefighter trucks across the district with the disinfectants to fight the locust attacks.