Get latest articles and stories on India at LatestLY. Notification for holding by-election for Sangrur Parliamentary Constituency is to be issued on Monday, candidates can file nominations till June 6, 2022 informed Punjab Chief Electoral Officer Dr S Karuna Raju. 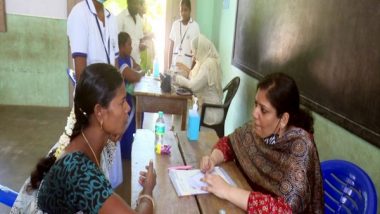 The election procedure shall be completed before June 28, 2022.

Dr Raju said that nomination papers are to be filed with the concerned Returning Officer between the hours of 11am and 3pm on any day other than a public holiday from 30.05.2022 to 06.06.2022.

As per the information, June 3, 2022 being Martyrdom Day of Guru Arjun Dev (Friday) and June 4, 2022 being first Saturday are not holidays, therefore nomination papers can be presented by the candidate on that day.

However, June 5, 2022 being Sunday is a holiday therefore, nomination papers cannot be presented to the Returning Officers on that day.

The nomination papers are to be filed in Form 2A for 12-Sangrur Parliamentary Constituency bye-Election, he said, adding that Blank forms are available with the Returning Officer. Typed nomination papers will also be accepted provided they are in the prescribed form, he added.

He said that a certificate is also required to make and subscribe to an oath or affirmation in the prescribed form before the concerned Returning Officer or any other person so authorized by the Election Commission of India. The oath/affirmation should be taken/made by a candidate after his nomination paper has been filed and before the date fixed for the Scrutiny of nominations.

Meanwhile, the Model Code of Conduct has come into force in the districts namely Sangrur, Barnala and Malerkotla from the date of announcement of by-elections (from 25.05.2022) by the Election Commission of India and shall remain in force till the completion of the election process. (ANI)