Get latest articles and stories on India at LatestLY. A team of State Disaster Response Force (SDRF) rescued a youth trapped in the swamp of the lake of Tehri Dam on Saturday. 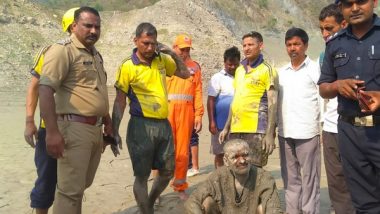 Uttarkashi (Uttarakhand) [India], May 14 (ANI): A team of State Disaster Response Force (SDRF) rescued a youth trapped in the swamp of the lake of Tehri Dam on Saturday.

Also Read | UP CM Yogi Adityanath Takes Stock of the Preparations Ahead of PM Narendra Modi's Arrival in Kushinagar.

He was rescued after four hours of hard work. The rescue has been successful with the help of police, NDRF, SDRF, local villagers and the administration team on the spot.

"On May 14 at time 1150, the SDRF team was informed that a person was trapped in the swamp on the banks of Bhagirathi river near Chinyalisaur Baldogi", said Inspector Dinesh Kumar.

On receipt of the above information, the SDRF rescue team reached the spot with the necessary rescue equipment, he added.

As time was passing in the scorching sun, the danger of the life of the person trapped in the swamp was also increasing. When the said person could not be reached by any means, then the personnel of SDRF rescue team, without wasting any time, got themselves down in the swamp.

As per the information, after one and a half hours of hard work, SDRF team rescued the person trapped in the swamp.

After which the person was brought to CHC Chinyalisaur for treatment, said Inspector Kumar. (ANI)