According to psycholinguists from the Centre for Language and Brain, HSE University, older adults use their knowledge of the world instead of grammar more often than young adults to predict semantic relations between words when reading. 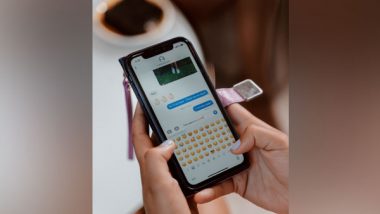 Washington, December 5: According to psycholinguists from the Centre for Language and Brain, HSE University, older adults use their knowledge of the world instead of grammar more often than young adults to predict semantic relations between words when reading.

Reliance on the meaning of individual words instead of accurate grammar analysis allows for faster information processing, but sometimes causes misinterpretations. The study has been published by the Quarterly Journal of Experimental Psychology. Also Read | Jammu And Kashmir: Contractor Held With Unauthorised Cash In Sopore.

Psychologists and psycholinguists have been studying the phenomenon of communication misunderstandings since the 1970s. Also Read | M Venkaiah Naidu Says Show Zero Tolerance Towards Corruption, Go For Stringent Implementation of Prevention of Corruption Act.

Thomas Erickson and Mark Mattson show that when asked "How many animals of each kind did Moses take on the Ark?" many people mistakenly answer "Two" without noticing that the question itself is incorrect: it was Noah, not Moses, who took animals on the Ark.

In 2003, Fernanda Ferreira demonstrated that the stimulus sentence 'The dog was bitten by the man' was misinterpreted as 'The dog bit the man' in 25 per cent of cases, which means that people can ignore grammatical relations between words and interpret sentences based on word semantics and their knowledge of typical real-life situations.

HSE researchers conducted an experiment to see how people of different ages use good-enough language processing while reading. A total of 349 people took part in the study, including adolescents aged 13-17, young adults aged 20-40, and older adults aged 55 and over.

The participants were asked to read a set of stimuli sentences with subordinate participial clauses that cause numerous errors in comprehension, for instance:

1) Misha vstretilsia so stomatologomi pozharnogo, plombiruiushchimi zuby bystro i bezboleznenno (Misha met the firefighter's dentist, who filled teeth quickly and painlessly. While not obvious from the English translation, the endings of the instrumental case in the Russian original sentence signal that the participle 'plombiruiushchim' (who filled) agrees with the head noun 'stomatologom' (dentist).

2) Misha vstretilsia so stomatologom pozharnogoi, potushivshegoi pozhar na sklade (Misha met the dentist of the firefighter who had put out a fire in the warehouse. The past participle 'potushivshego' (who had put out) agrees with the second noun 'pozharnogo' (firefighter) as they are both used in genitive case).

3) Misha vstretilsia so stomatologomi pozharnogo, potushivshimi pozhar na sklade (Misha met the firefighter's dentist, who had put out a fire in the warehouse. Although grammatically correct, this Russian sentence reads as if the dentist, and not the firefighter, put out the fire because the noun 'stomatologom' (dentist) and the dependent participle 'potushivshim' (who had put out) have endings of the instrumental case).

4) Misha vstretilsia so stomatologom pozharnogoi, plombiruiushchegoi zuby bystro i bezboleznenno (Misha met the dentist of the firefighter who filled teeth quickly and painlessly. Similarly to sentence 3 above, the grammatical structure of this sentence suggests that it is the firefighter, not the dentist, who fills teeth because both the noun 'pozharnogo' (firefighter) and the present participle 'plombiruiushchego' (who filled) are used in the Russian genitive case).

The answer of 'firefighter' to the question 'Who put out the fire?' after sentence 3 shows that the participants ignored the case ending, i.e. the syntactical relation, and their replies are based on the meanings of the words and the participants' knowledge of the world.

This demonstrates that the participants use good-enough language processing. Both adolescents and young adults appear to use good-enough language processing actively in their speech perception: they gave the incorrect reply of 'firefighter' to the question 'Who put out the fire in the warehouse?' asked after sentence 3 (in 63-68 per cent of responses).

However, older adults replied incorrectly even more often (79 per cent of responses). Good-enough language processing, therefore, is formed in adolescence and intensifies in older adults.

According to the authors, this outcome may be due to the fact that the accumulation of world knowledge and language exposure in older adults creates stronger expectations about the content of messages and encourages older people to rely on these expectations rather than the information they actually perceive.

It may also be due to an unconscious strategy to spare older adults' limited cognitive resources for other purposes (such as verbal working memory).

The researchers also show that when respondents gave incorrect replies to the question asked after sentences 3 and 4 (which were difficult to understand), they had read those sentences faster.

Anastasiya Lopukhina, author of the article and Research Fellow of the Centre for Language and Brain, HSE University, "It appears that good-enough language processing enables us to process information a little faster. Although it may cause misunderstandings, it seems to be economical and less time-consuming."