PAK vs NZ 2020-21: Denial of Practice During Managed Isolation in New Zealand Has Affected Our Preparation, Says Misbah-ul-Haq 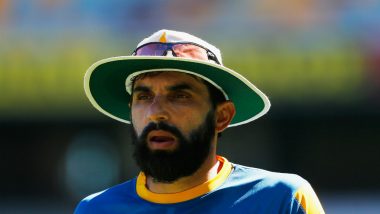 Christchurch, December 6: Pakistan head coach Misbah-ul-Haq on Sunday said not being able to train while being in managed isolation has affected his side's preparation ahead of the series against New Zealand, beginning December 18 in Auckland. The 53-strong Pakistan team had been denied the right to train after eight members had tested positive for COVID-19.

"Top professional athletes require a certain environment to prepare so that they can perform at the minimum expected levels every time they represent their countries," Misbah said in a statement announcing the T20 squad for the series.

"While we completely respect and understand the New Zealand Government Laws, which have been put in place for the health and safety of their public, there is no denying the fact that the implementation of certain regulations has affected our athletes, both mentally and physically prior to an international series," the former skipper added. Pakistan Tour of New Zealand 2020-21: Visitors Recall Sarfaraz Ahmed for T20Is.

Under exemptions granted by the New Zealand government, the Pakistan team would have been allowed to leave their Christchurch hotel to train in small groups after the third day of their 14-day isolation period.

However, the visitors were denied permission to practice when some players breached COVID-19 protocols on their first day in Christchurch. CCTV footage from the team's Christchurch hotel showed players mingling in hallways and sharing food in violation of managed isolation regulations.

The Pakistan squad was also issued a final warning, following which New Zealand's Ministry of Health had said that the team's conduct had significantly improved. Three More Pakistan Players in New Zealand Test Positive for COVID-19, Count Stands at 10.

"Nonetheless, when we will leave the isolation facility in the next day or two, we will try to put all this behind us and focus on the challenge of facing New Zealand in both the formats," Misbah said. "New Zealand are a formidable side in their conditions and their recent performances against the West Indies confirm why they are ranked second in Tests and just behind us in T20Is in sixth position," he added.