Get latest articles and stories on Sports at LatestLY. The Delhi Capitals players were in for a surprise when they received multiple gifts from their fans at their team hotel in Mumbai ahead of their last league match against Mumbai Indians. 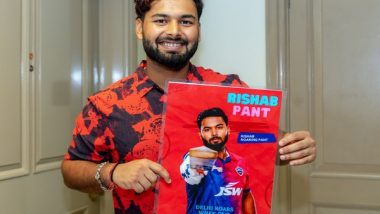 DC Captain Rishabh Pant receives a poster from a fan

New Delhi [India], May 25 (ANI): The Delhi Capitals players were in for a surprise when they received multiple gifts from their fans at their team hotel in Mumbai ahead of their last league match against Mumbai Indians.

With the IPL 2022 taking place away from the city of New Delhi, the admirers showed their support through drawings, posters and personalized notes and gifts leaving the players moved by the love from their fans.

The Delhi Capitals have not been in action in their own city for the last three seasons and therefore the supporters have found another way to intimate that the players are always in their thoughts during the season. The fans mailed their handpicked goodies to the Delhi Capitals office in Delhi, which were then delivered to the team in Mumbai.

Additionally, the fans also had an opportunity to interact with Captain Rishabh Pant, Head Coach Ricky Ponting along with the other members of the Delhi Capitals camp in a virtual meet. The fans showed their sketches, performed dance, sang songs and also recited personalised poems for the team.

Also Read | GT vs RR, IPL 2022: David Miller Gives an Expression to His Smashing Knock for Titans, Says ‘If It's in the V, It's in the Tree’.

The Delhi Capitals finished at the fifth place in IPL 2022 after going down by 5 wickets against Mumbai Indians on Saturday.(ANI)