Bayern Munich are coming around to the idea of letting Robert Lewandowski leave. Barcelona have agreed personal terms with the striker and he is expected to sign a three-year contract. 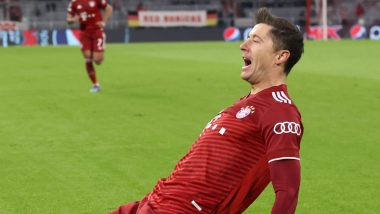 Barcelona are moving closer to securing the transfer of Robert Lewandowski in the summer. The club have reportedly reached a verbal agreement with the Polish striker and are now working on a deal with Bayern Munich to complete the move. Lewandowski wants to leave the Bavarian outfit in search of a new challenge. Robert Lewandowski Transfer News: 'Bayern Munich is History' Says Striker's Agent Amid Barcelona Links.

According to a report from Sky Sports' Florian Plettenberg, Barcelona have agreed personal terms with Bayern Munich star Robert Lewandowski. The Polish striker will sign a three-year contract which will seem him stay at the club until 2025. Robert Lewandowski Transfer News: Xavi Directly Contacts Bayern Munich Star Over Potential Move.

Robert Lewandowski was one of the highest-paid players at Bayern Munich, but despite Barcelona's financial restrictions, the striker's wage demands will not be an issue for the Catalan giants.

The Poland international has already contacted the Bayern Munich board about his desire to leave the club. However, the Bavarians had insisted that the striker remains at the club and completes his current contract which will expire in 2023.

But it is understood that Bayern Munich are coming around to the idea of letting Robert Lewandowski leave. They are negotiating with Barcelona over the transfer fee but first will need to find a replacement for the Polish star. Stuttgart's Sasa Kalajdzic is said to be in contention.

Barcelona recently presented their initial offer to Bayern Munich for the striker. The Bavarian giants have not yet responded but are likely to deny it as it does not match their expectations. Negotiations are expected to carry on for the transfer.

(The above story first appeared on LatestLY on May 25, 2022 02:20 PM IST. For more news and updates on politics, world, sports, entertainment and lifestyle, log on to our website latestly.com).