This would also mean that it is just before the T20 World Cup. And that has seen franchises sweating over whether foreign players would be made available to them. 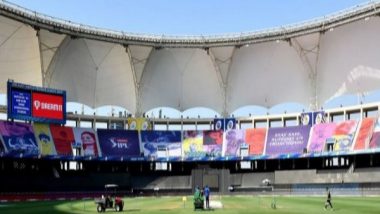 New Delhi, June 24: With the remaining games of the 14th edition of the Indian Premier League (IPL) set to be played in the UAE, some of the franchises are planning to have their officials head to the country post-July 6 to finalise the logistics, keeping a strict eye on the COVID-19 protocols.

Speaking to ANI, an official of one of the franchises said it is important to head to UAE as the situation is a little different as compared to the 2020 edition and bulk bookings can be a problem considering that borders will be open for travel.

"We are looking at heading to the UAE post-July 6 once we get the go-ahead from the BCCI and the government so that we can seal the logistical deals. Unlike last year, bulk bookings won't be as easy this year as you will have people travelling into the country and that makes the work around bio-bubbles all the more critical," the official explained.

Another official said it had approached the BCCI to travel earlier, but getting the approval will take some time. "We sent in a request to the BCCI to travel, but we have been asked to wait for the approval. While we had a good stay last time, we are looking at ways to making things even better this time around and that is the reason why we want to be present there while dealing with the hotel management," the official said.

An official of another franchise confirmed that they are looking at a change in hotel and thus it will be important to be physically present to close the deal.

"We are looking at a new option and if we get a good deal, we will be looking to close the deal at the earliest. You need the hotel staff and the travel staff like drivers to also undergo quarantine and RTPCR tests before entering the bio-bubble. So, the earlier we can zero in on the logistics, the better for all of us," the official told ANI.

The IPL is set to get underway on September 19 and the final is to be played on October 15. This would also mean that it is just before the T20 World Cup. And that has seen franchises sweating over whether foreign players would be made available to them.

While some of the players have in recent times said that they could miss the remaining part of the IPL with an eye on the T20 World Cup -- set to be played in October-November -- franchises are confident that BCCI will engage in positive discussions with the foreign boards and make the players available for the remaining games.

"While we are yet to hear from the BCCI on this, we are confident that we will have the services of the foreign players. Hoping for them to get the NOCs from their respective boards," the official said.

Cricket West Indies President Ricky Skerritt has already confirmed that CWI, the BCCI, and the Caribbean Premier League (CPL) are engaged in talks for a tweaked CPL schedule to accommodate the second phase of the IPL. The CPL, which was originally scheduled to commence on August 28, will now be played in St Kitts and Nevis between August 26 and September 15.