Get latest articles and stories on Sports at LatestLY. Sethu FC picked up a comfortable 3-0 win over Odisha Police in their Indian Women's League 2022 fixture at the 7th Battalion Ground in Bhubaneswar, on Friday. 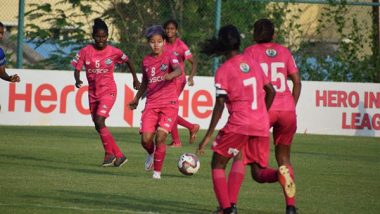 Bhubaneswar (Odisha) [India], May 14 (ANI): Sethu FC picked up a comfortable 3-0 win over Odisha Police in their Indian Women's League 2022 fixture at the 7th Battalion Ground in Bhubaneswar, on Friday.

The former champions of the IWL were at the top of their game right from kickoff. Devneta Roy found an opportunity in the opening minutes but her header was picked out by Odisha Police goalkeeper Rajeswari Das. Subsequently, Sethu FC found another breakthrough in the 15th minute. However, this time Sandhiya Ranganathan was flagged offside.

At the other end, Sarojini Tirkey twice came close for Odisha Police, but the forward couldn't capitalize on the opportunities. Finally, in the 27th minute, Sandhiya Ranganathan gave Sethu FC the lead via a powerful shot into the bottom corner.

Devneta Roy made it 2-0 in the 33rd minute as she beat the goalkeeper from inside the box. Sethu FC took the driver's seat in the game and looked certain to take the three points home. In the 38th minute, the Tamil Nadu-based side had a chance to put the game to bed, but Odisha Police goalkeeper Rajeswari Das had other plans.

Arifa Zaheer stepped up to take the penalty, but her shot was parried away by Das to maintain the score 2-0 in favour of Sethu FC.

Following the restart, both sides came close to scoring via Tirkey and Roy respectively, but neither found the back of the net. Eventually, in the 68th minute, Renu Rani stepped in to make it 3-0. Sandhiya's dangerous cross was misjudged by the Odisha Police goalkeeper and Renu only had to direct the ball towards the goal.

With the three points in the bag, Sethu FC registered their eighth consecutive victory in the IWL and take the provisional top spot on the league table. (ANI)