Get latest articles and stories on Sports at LatestLY. Harry Kane netted a superb goal and made another for Son Heung-min to help Tottenham Hotspur to a 3-2 comeback win at Newcastle United. 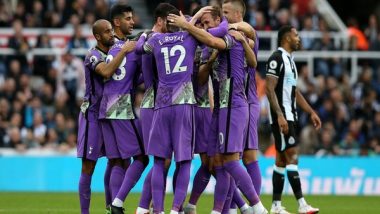 London [UK], October 18 (ANI): Harry Kane netted a superb goal and made another for Son Heung-min to help Tottenham Hotspur to a 3-2 comeback win at Newcastle United.

In Steve Bruce's 1,000th match in all competitions as a manager and in front of Newcastle's new owners, the home fans were given a dream start when Callum Wilson headed in Javier Manquillo's second-minute cross.

Spurs were level on 17 minutes with Tanguy Ndombele's superb curling finish after Sergio Reguilon had picked him out. Kane then turned the match on its head with a clipped finish from Pierre-Emile Hojbjerg's precise through-ball for his first league goal of the season.

Lucas Moura headed against the crossbar on 39 minutes before play was stopped due to a medical issue in the crowd. Shortly after play resumed in first-half stoppage time, Son's close-range finish from Kane's assist put Spurs 3-1 up.

After the break, Newcastle substitute Jonjo Shelvey was sent off for a second booking. Eric Dier's 89th-minute own goal gave the hosts hope, but Spurs held on to move up to fifth on 15 points. Newcastle remain 19th with three points.

In an evenly contested first half, Alex Iwobi squandered an opportunity to put Everton ahead from close range following Abdoulaye Doucoure's 22nd-minute cross. After the break, Salomon Rondon headed agonisingly wide for Everton while West Ham's Pablo Fornals curled his shot just off target as the teams traded chances.

But with 16 minutes remaining, West Ham took the lead when a superb corner kick from Jarrod Bowen was headed in by Ogbonna from close range. West Ham's victory takes them to 14 points, ahead of eighth-placed Everton on goal difference. (ANI)