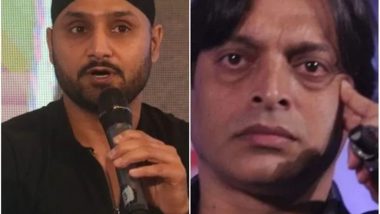 The fans and the players are already geared up for the blockbuster contest between India and Pakistan T20 World Cup 2021 which will be held on October 24, 2021. The stakes are high as both teams will take on each other in the Super 12 match. Now ahead of the much-awaited contest between the two teams, Harbhajan Singh got into a hilarious banter with Pakistan's Shoaib Akhtar. The Indian spinner hilariously trolled the Pakistani pacer on social media. India vs Pakistan, ICC T20 World Cup 2021: Ajit Agarkar Reckons Babar Azam and Co Won’t Pose a Big Challenge for Virat Kohli’s Men.

In a tweet, the Pakistani pacer shared a photo on social media where Bhajji and Akhtar were seen having a pre-discussion about the mother of all contests. Little did he know that the Indian spinner would troll him hilariously and poke fun at him with his records. Bhajji retweeted the post and wrote, “When u have 400 plus test wickets am sure you know more about cricket then someone with less then 200 wickets.”

When u have 400 plus test wickets am sure you know more about cricket then someone with less then 200 wickets 🤗 🤦🏻‍♂️ https://t.co/jXvdiYLyoE

On Sunday, even Ajit Agarkar said that Pakistan will not pose a threat to India. Looking at the current for the Indian team, it is very likely that they will defeat Pakistan. As we all know that India enjoys a 5-0 record against Pakistan in the T20 World Cups. The match will be held at the Dubai International Stadium in Dubai.

(The above story first appeared on LatestLY on Oct 18, 2021 09:17 AM IST. For more news and updates on politics, world, sports, entertainment and lifestyle, log on to our website latestly.com).