Hollywood actor Anthony Mackie has been confirmed to star as the lead in the Twisted Metal live-action series, which is currently in the works at Sony Pictures Television. 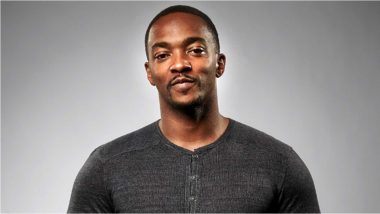 Hollywood actor Anthony Mackie has been confirmed to star as the lead in the Twisted Metal live-action series, which is currently in the works at Sony Pictures Television. According to Variety, Sony Pictures Television and PlayStation Productions will be developing the series, based on the 'Twisted Metal' vehicular combat games, the first of which was released in 1995. It was originally reported in 2019 that Sony was interested in developing a series based on the games. IPL 2021: From Anushka Sharma to Sanjana Ganesan, Meet the Gorgeous WAGs of Indian Cricketers.

The new series, which was first announced to be in development in February, has been described as an action-comedy, based on an original take by Rhett Reese and Paul Wernick, the writers behind films such as 'Deadpool' and 'Zombieland'. The show will narrate the story of motor-mouthed outsider John Doe (Mackie) who is offered a chance at a better life, but only if he can successfully deliver a mysterious package across a post-apocalyptic wasteland. Nusrat Jahan Son’s Birth Certificate Reveals Father’s Name as Yash Dasgupta.

With the help of a trigger-happy car thief, he'll face savage marauders driving vehicles of destruction and other dangers of the open road, including a deranged clown named who drives an all too familiar ice cream truck, whom fans of the game will remember as Sweet Tooth. Mackie recently starred in the Disney Plus-Marvel series 'The Falcon and the Winter Solider', reprising his role from multiple MCU films. He is also set to star as the lead in the upcoming fourth 'Captain America' film. His other recent roles include Season 2 of 'Altered Carbon' and the films 'The Banker', 'Seberg', 'Point Blank', 'The Hate U Give', and 'Detroit'.