Balochs Are Sacrificing Their Lives Due to Pakistani Oppression, Says Baloch Woman Activist

Shari Baloch, who joined Baloch Liberation Army (BLA) two years ago volunteered herself for a "self-sacrificing mission" and targeted the Chinese to take revenge against Baloch genocide, occupation of Balochistan by Pakistan and now China's growing investment and interference in the region. 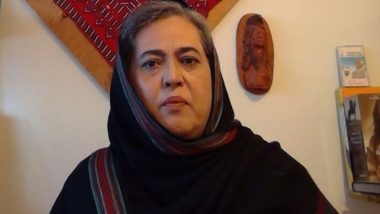 Toronto, April 29: Distressed by a recent incident of a 30-year-old Baloch woman teacher blowing herself and killing four people, including three Chinese at Karachi University, a Baloch woman activist calls it a consequence of Pakistan's oppressive policies and genocide in Balochistan province. Shari Baloch, who joined Baloch Liberation Army (BLA) two years ago volunteered herself for a "self-sacrificing mission" and targeted the Chinese to take revenge against Baloch genocide, occupation of Balochistan by Pakistan and now China's growing investment and interference in the region.

Prof. Naela Quadri Baloch, the President of the World Baloch Women's Forum in Canada said, "If a mother of two beautiful kids who is having a very decent and well-educated family, Shari Baloch can decide to be a self-sacrificer then the world can understand what Baloch people are going through and who is responsible for that". Prof. Naela added, "It is the state of Pakistan and the Communist government of China who are responsible for pushing our daughters and sons to the level of self-sacrifice because there is no political platform left and the United Nations are also not listening to Baloch people". Pakistan Army Chief General Qamar Javed Bajwa Visits LoC, Lauds Combat Readiness of Troops.

Balochistan has long demanded independence from Pakistan, and the multi-billion-dollar China-initiated One Belt One Road (OBOR) Project has further inflamed passions. The Baloch, who are opposing the China-Pakistan Economic Corridor as part of OBOR, are facing oppression and genocide by the Pakistan Army. There are uncounted incidents of enforced disappearances and killings of Baloch political activists, intellectuals and students by the Pakistani security forces and secret agencies.

Prof. Naela said, "We are at the deepest level of pain. We are hurt that our highly educated youth, if they were not Baloch, could have a bright future. But as they are Baloch, which is their main crime, they have no future. They are picked up during daylight from the University by the ISI people, the Pakistani military, and then they disappear because the former knows that if they will be educated, they will become doctors, engineers, teachers or journalists". Pakistan: PM Shehbaz Sharif Orders 'Foolproof Security' for Imran Khan Ahead of His Lahore Rally.

"Being Baloch as they have no future in Pakistan, they have decided to be self-sacrificers. They have joined organizations like Majeed Brigade and Baloch Liberation Army because they think it is the only way to survive". A large number of Baloch youth and political activists have migrated abroad to save their lives. They have been raising their concerns at international platforms, but there is no ray of hope.

Prof. Naela said, "Baloch people have raised their concerns in the United Nations and other international forums in a very peaceful way but nobody listens and our youth has been observing this thing. They see that there is no response from any country so if the International community will remain silent and just keep looking at the genocide of the Baloch people, this will be the reaction".

"Our sons and daughters, even highly educated ones have decided to go for self-sacrifice because they don't see any future or hope", said the Baloch political activist, who herself is living in exile due to life threats.