Get latest articles and stories on World at LatestLY. The group of seven industrialized nations, representing the world's richest nations, on Saturday urged China not to undermine the sanctions imposed on Russia for its attack on Ukraine and also not to justify Moscow's action in Kyiv, G7 said in a statement. 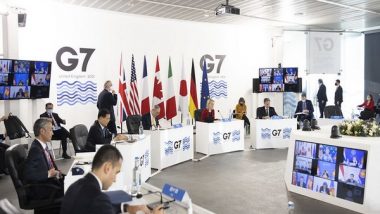 Washington [US], May 14 (ANI): The group of seven industrialized nations, representing the world's richest nations, on Saturday urged China not to undermine the sanctions imposed on Russia for its attack on Ukraine and also not to justify Moscow's action in Kyiv, G7 said in a statement.

The group called China and urged, " not to assist Russia in its war of aggression against Ukraine, not to undermine sanctions imposed on Russia for its attack against the sovereignty and territorial integrity of Ukraine, not to justify Russian action in Ukraine, and to desist from engaging in information manipulation, disinformation and other means to legitimize Russia's war of aggression against Ukraine," CNN reported citing the statement issued by G7.

The foreign ministers of the G7 also said that they will never recognize the borders that Russia has attempted to change by their military aggression and added that the group has also rejected any notion of spheres of influence and use of the force that is not in compliance with international law, according to the separate joint statement issued by G7.

"We will never recognize borders Russia has attempted to change by military aggression," the statement read, adding that the G7 rejected "any notion of spheres of influence and any use of force that is not in compliance with international law."

These developments came after holding the talks in Germany where the group of foreign ministers collectively expressed their "solidarity with and support for Ukraine as it defends itself against Russia's unjustifiable, unprovoked and illegal war of aggression."

G7 foreign ministers also said they would "uphold (their) engagement in the support of the sovereignty and territorial integrity of Ukraine, including Crimea and all states," and affirmed its determination to "ensure availability and accessibility of food, energy and financial resources as well as basic commodities" in Ukraine, reported CNN.

In the presence of the foreign ministers of Ukraine and Moldova, the group added that the war had reaffirmed their determination to reject Russia's attempt of redrawing the borders by force in violation of the sovereignty and territorial integrity of the country.

We will pursue our ongoing military and defence assistance to Ukraine as long as necessary," the statement read.

"The G7 will also broaden its sanctions to include the sectors on which Russia has particular dependence," without the statement giving more details.

G7 foreign ministers emphasized their support of Moldova's stability, sovereignty, and territorial integrity, and called on Belarus to stop enabling Russia's aggression and abide by its international obligations. There are fears that Russia could start a new front in the war in Eastern Europe via Transnistria, a breakaway territory within Moldova that has housed Russian troops for decades, as reported by CNN.

On February 24, Russia launched a military operation in Ukraine, three days after recognising the Ukrainian breakaway regions of Donetsk and Luhansk as "independent republics". The Russian Ministry of Defense maintains that the operation is targeting Ukrainian military infrastructure only. In response, Western nations imposed comprehensive sanctions against Russia. (ANI)