Afghanistan Ambassador to India, Farid Mamundzay on Friday said that India and Afghanistan have planned to hold a cultural week from September 2-5 with an aim to strengthen cultural ties between the two countries. 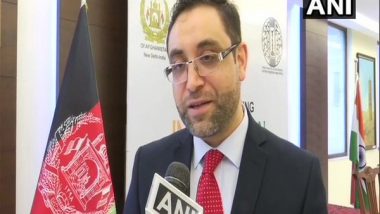 New Delhi [India] July 30 (ANI): Afghanistan Ambassador to India, Farid Mamundzay on Friday said that India and Afghanistan have planned to hold a cultural week from September 2-5 with an aim to strengthen cultural ties between the two countries.

The cultural week has been planned by the Afghanistan embassy in New Delhi and Indian Council for Cultural Relations and several diplomats and bureaucrats from both countries will also attend the event.

"Afghanistan has learned a lot from Indian culture, young Afghans should understand and abide Indo-Afghan relations, hence we have planned this event," Mamundzay told media persons.

Several events including cultural engagement, poetry events, food, music, etc will be organised as a part of this event, he added.

The Afghan envoy also expressed concern over the deteriorating situation of Afghanistan and said "Afghanistan is going through a tough time, we are struggling with terrorism and extremisms, but this cultural week would bring a news of happiness among Afghans," he said.

While talking to ANI, Mamundzay also cautioned China for ignoring violence by Taliban and said that if terror groups continue to operate in Afghanistan then it will adversely impact Beijing.

Taliban have intensified their offensive against civilians, Afghan defence, and security forces as the foreign troops are withdrawing from the war-torn country.

Over the last few weeks, they captured several districts in Afghanistan including Takhar, the country's northeastern province. The extremist group issued diktats like ordering women to not leave home alone and men to grow their beards. (ANI)