But there are signs that the vaccine's efficacy wears off over time, and Israel has seen a spike in cases of the new delta variant, even among people who are vaccinated. 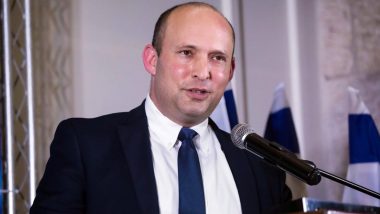 Jerusalem, July 29: Israel's prime minister on Thursday announced that the country would offer a coronavirus booster to people over 60 who have already been vaccinated. The announcement by Naftali Bennett makes Israel the first country to offer a third dose of the Pfizer/BioNtech vaccine to its citizens on a wide scale.

“I'm announcing this evening the beginning of the campaign to receive the booster vaccine, the third vaccine,” Bennett said in a nationally televised address.

“Reality proves the vaccines are safe. Reality also proves the vaccines protects from severe morbidity and death. And like the flu vaccine that needs to be renewed from time to time, it is the same in this case.” COVID-19 Vaccine Update: Covishield Single Dose Efficacy Drops After 16 Weeks in Those Above 60 Years of Age, Claims Research.

The decision comes at a time of rising infections and signs that the vaccine's efficacy dwindles over time. In a nationally televised address, Bennett said the country's president, Isaac Herzog, would be the first to get the booster on Friday. It will be offered to the general public on Sunday.

Bennett said his first call after the news conference would be to his mother to encourage her to get her booster shot. Neither the U.S. nor the EU have approved coronavirus booster shots. It's not yet proven if a third dose helps and, if so, who needs one and when. The first large study of the strategy is beginning in thousands of patients in Norway.

Previously, boosters were used in some countries with the Chinese and Russian vaccines. Early this year, Israel carried out one of the world's most aggressive and successful vaccination campaigns. Over 57 per cent of the country's 9.3 million citizens have received two doses of the Pfizer/BioNTech vaccine, and over 80 per cent of the population over 40 is vaccinated.

The vaccination programme allowed Israel to reopen its economy ahead of other countries. But there are signs that the vaccine's efficacy wears off over time, and Israel has seen a spike in cases of the new delta variant, even among people who are vaccinated. Israel, UK Data Show Mixed Signals on Pfizer-BioNTech's COVID-19 Vaccine Potency Against Delta Strain.

People over the age of 60 who were vaccinated more than five months ago will be eligible for the booster. Maccabi, one of Israel's four publicly funded health maintenance organizations, said its members could already register and the vaccinations would start on Sunday.