Get latest articles and stories on World at LatestLY. Chairman of Pakistan's Islamist political party, Jamaat-i-Islami (JI), Sirajul Haq demanded the government eradicate the system of interest-based economy and warned of protests across the country if demands are not fulfilled, Dawn reported on Saturday. 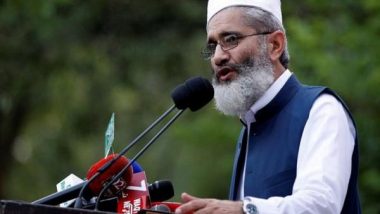 Lahore [Pakistan], November 27 (ANI): Chairman of Pakistan's Islamist political party, Jamaat-i-Islami (JI), Sirajul Haq demanded the government eradicate the system of interest-based economy and warned of protests across the country if demands are not fulfilled, Dawn reported on Saturday.

Speaking to the JI employees in Mansoorah on Friday, he said that the government must give the banks instructions to withdraw their appeals of the Federal Shariat Court's ruling against interest.

When he opened the State Bank of Pakistan, Quaid-i-Azam Muhammad Ali Jinnah gave unambiguous instructions to adopt the Islamic model of the economy, according to Haq, who also claimed that the interest-based economy violated the Constitution.

The JI leader also expressed discontent over the fact that seven decades had passed and the authorities still had not moved in this direction.

Haq also urged the Pakistan government to implement the Riba amnesty programme and base its taxation policies on Zakat and Ushr. He added that the International Monetary Fund (IMF) managed the country's economy and that the national curriculum was created by western non-governmental organisations (NGOs). In the presence of these upholders of the status quo, he claimed, there would be no change in the nation and its economic crisis, Dawn reported.

Meanwhile, Pakistan is reeling under a deep economic crisis. The PTI government has always been blamed for not being able to control inflation by the incumbent rulers when they were in opposition.

Imran Khan was ousted from power after losing a no-confidence vote, which he alleged was part of a US-led conspiracy targeting him because of "independent" foreign policy. Even after his ouster, the former PM has continued with foreign conspiracy tirades at every rally. (ANI)