Russian forces in Ukraine's Sumy Oblast are evicting the civilians from their homes and are also stealing food, Sumy's Governor Dmytro Zhyvytsky said. 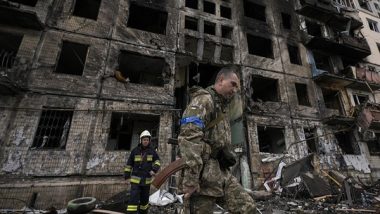 Zhyvytsky gave in-detailed information about the looting through the Telegram on March 16, reported The Kyiv Independent.

The city sustained heavy fighting since the Russian forces launched its military operations in Ukraine on February 24.

Russia has been facing immense pressure from the international community to stop its military operations in Ukraine which has created an immense humanitarian crisis with thousands of refugees from Ukraine fleeing to the neighbouring countries to the West.

The International Court of Justice (ICJ) at The Hague ruled that pending the final decision in the case, Russia must suspend the military operations that it commenced on February 24 in the territory of Ukraine.

Ukraine on February 26 had filed an application at the ICJ to initiate proceedings against the Russian Federation under the Convention on the Prevention and Punishment of the Crime of Genocide.

Meanwhile, the United Nations Security Council (UNSC) is scheduled to hold an extraordinary meeting at 3:00 pm ET on Thursday to discuss the ongoing humanitarian crisis in Ukraine.