Prime Minister Narendra Modi on Saturday as the expansion of the global value chain is important as COVID-19 taught the world that the global economy should be more diversified now. 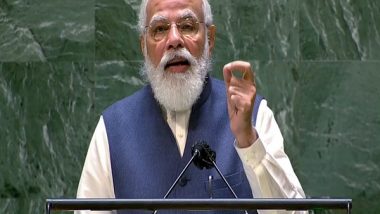 New York [US], September 25 (ANI): Prime Minister Narendra Modi on Saturday said the expansion of the global value chain is important as COVID-19 taught the world that the global economy should be more diversified now.

Addressing the 76th UNGA session here on Saturday, the Prime Minister said it is necessary to ensure technology with democratic values.

"Today we understand the importance of technology for humans but in changing world it is necessary to ensure technology with democratic values. India's democratic values inspire doctors, innovators, engineers, managers from India living in different parts of the world to continue working in the interest of humanity," he said.

"We have seen this in the Covid pandemic. COVID-19 taught the world that the global economy should be more diversified now. For this, expansion of the global value chain is important. Our Atmanirbhar Bharat Abhiyan is inspired by this feeling," he added.

Also Read | Sex Coach Stabbed to Death by Her ‘Jealous’ Husband in Russia.

He covered a wide range of issues in his speech at the UNGA and called on the international community to speak in unison to strengthen the rule-based world order.

"To strengthen the rule-based world order, the international community must speak in unison. The broad consensus reached during India's Presidency in the Security Council shows the world the way forward in the matter of maritime security," he said.

He said India today is moving forward on the path of integrated development with 'Antyodaya' principle.

Stressing that the country's "faith is to serve people", the Prime Minister invited the global manufacturers of vaccines to come and make vaccines in India.

He also informed that India has developed the first DNA vaccine, which can be given to people older than 12 years.

PM Modi pointed out that despite having limited resources, "India is working aggressively towards vaccine development and manufacturing".

He said India is known as the mother of democracy, adding that "our diversity is the identity of our strong democracy".

The Prime Minister arrived in New York on Friday evening for the final leg of the US visit. He left from Washington on Friday after a bilateral meeting with US President Joe Biden and after attending the Quad Summit.

PM Modi reached Washington on Wednesday for a three-day visit to the country, his first beyond neighbourhood since the outbreak of the COVID-19 pandemic.

The Prime Minister also held bilateral meetings with US Vice President Kamala Harris and his Australian and Japanese counterparts Scott Morrison and Yoshihide Suga during his visit. (ANI)