After facing a long wait owing to production-related delays caused by the global chip shortage, Ola Electric revealed that it has dispatched all units of its S1 and S1 Pro electric scooters to its customers. 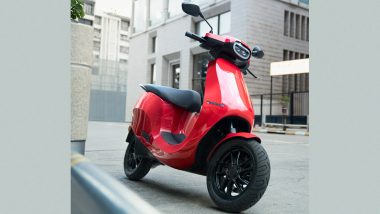 New Delhi: After facing a long wait owing to production-related delays caused by the global chip shortage, Ola Electric revealed that it has dispatched all units of its S1 and S1 Pro electric scooters to its customers. In a tweet, Bhavish Aggarwal, Founder and CEO, Ola, said the company has dispatched electric scooters to all its buyers. Ola Electric To Install Over 4,000 EV Charging Points Next Year.

"Update on December deliveries: we have dispatched vehicles to all who purchased. Some in transit, most already at delivery centres near you getting through RTO registration process. The registration process took longer than we anticipated as a fully digital process is new for all," Aggarwal said in a tweet.

Update on December deliveries: we’ve dispatched vehicles to ALL who purchased.

Recently, some customers reported problems related to mechanical issues, build quality, as well as range offered on a full charge. The company later said that all problems on the scooters were fixed. Arun Sirdeshmukh, Chief Business Officer, Ola Electric, said that the company has already shipped almost 4,000 scooters this month, which are being delivered to customers across cities.

"Every customer is important to us and while we have received overwhelmingly positive feedback from nearly every customer, the very few issues raised by the customers, mostly caused during transit, have been resolved swiftly," Sirdeshmukh told IANS.

The Ola S1 scooters are being manufactured at the 'Futurefactory', which is said to be the largest, most advanced and sustainable two-wheeler factory in the world. The Ola S1 is priced at Rs 99,999; for the S1 Pro, customers will have to pay Rs 1,29,999 (ex-showroom). These prices include the FAME II subsidy, but exclude state subsidies.

As part of its ambitious charging infrastructure goal, Ola Electric has also announced that it will install more than 4,000 charging points for its electric scooters across cities next year. In a tweet, Aggarwal said that Hypercharger rollout has begun across cities.

(The above story first appeared on LatestLY on Dec 31, 2021 04:52 PM IST. For more news and updates on politics, world, sports, entertainment and lifestyle, log on to our website latestly.com).