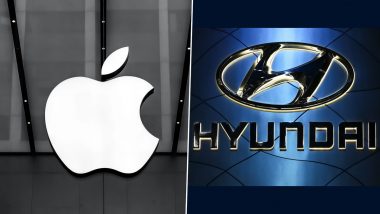 Seoul/New Delhi, Feb 8: In an apparent setback, Hyundai said on Monday that it is no longer in talks with Apple for the joint development of an autonomous vehicle. In a statement, Hyundai said that it "has received requests to co-develop autonomous electric vehicle from multiple companies but they were in the early stages and nothing has been finalised." Apple’s First Electric Car to Be Built on Hyundai’s EV Platform: Report.

Last month, Hyundai confirmed that it was in talks with Apple to develop an electric car. After initially naming Apple in its statements, it removed the name of the tech giant from its further statements. The setback came as amid reports that the first Apple electric car will be built on Hyundai's electric vehicle platform and the initial model could lead to new vehicles built in association with General Motors and European manufacturer PSA.

Kuo believes that the earliest possible date for an Apple car to hit the market is 2025. The Apple car is rumoured to feature LiDAR technology, which could add a lot of depth to onboard AI functions. The vehicle is expected to use a "C1" chip based on the A12 Bionic processor with in-cabin AI capabilities such as eye-tracking.

(The above story first appeared on LatestLY on Feb 08, 2021 11:23 AM IST. For more news and updates on politics, world, sports, entertainment and lifestyle, log on to our website latestly.com).