Tech billionaire Bill Gates has said that he holds no position in cryptocurrencies or non-fungible tokens (NFTs), as they are "100 per cent based on greater fool theory". 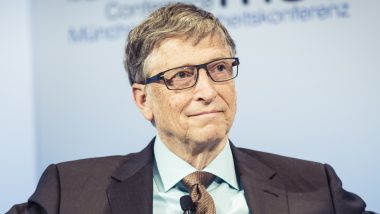 San Francisco, June 15: Tech billionaire Bill Gates has said that he holds no position in cryptocurrencies or non-fungible tokens (NFTs), as they are "100 per cent based on greater fool theory".

The theory is a financial concept that even overpriced assets can make money as long as you find a bigger idiot to sell them to.

Gates said he rather preferred investing in assets with tangible outputs, like farms or factories, "or a company where they make products". He was speaking at an event on climate change hosted by TechCrunch. US Fed Hikes Its Benchmark Interest Rate by 0.75% Point, Biggest Increase Since 1994

"I'm not involved in that. I'm not long or short in any of those things," Gates said on crypto and NFTs. He said he was suspicious of these assets being designed to "avoid taxation or any sort of government rules".

This is not the first time Gates has expressed scepticism about cryptocurrencies.

In an interview last year, he worried about the dangers of regular investors buying into Bitcoin, especially when the cryptocurrency's value was so volatile and could be tanked on the basis of a tweet from a prominent investor, like Elon Musk, the Verge reported.

"I do think people get bought into these manias who may not have as much money to spare," Gates had said. "My general thought would be that if you have less money than Elon, you should probably watch out."

Gates' warnings about volatility were prophetic. When he was speaking in 2021, Bitcoin was surging in price but later towards year end it slumped dramatically, the report said.

Since then, the price of Bitcoin has crashed once again. This dramatic fall is part of a wider set of convulsions rocking the crypto world, after the collapse of so-called "stablecoin" Terra in May and the ongoing failure of crypto lending platform Celsius.

Similarly, prices for NFTs have also fallen sharply. Some of the biggest projects, like the Bored Ape Yacht Club, have more than halved in value. At the same time, trading volume has increased, as buyers seek to snap up digital assets at rock-bottom prices, the report said.

(The above story first appeared on LatestLY on Jun 16, 2022 08:41 AM IST. For more news and updates on politics, world, sports, entertainment and lifestyle, log on to our website latestly.com).