He posted a video where his face can be seen morphed onto SRK's body. The cricketer clubbed many iconic scenes from the film to make this hilariously cool clip. 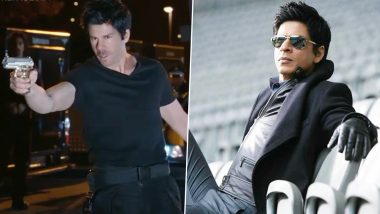 David Warner who has been missing out on all the action happening at the India vs Australia test match is making sure he keeps his fans entertained somehow. The cricketer is quite famous for his Instagram videos and we are quite familiar with his love for Bollywood. A few days back the actor shared a video where he morphed his face on Hrithik Roshan's and recreated scenes from Jodhaa Akbar, War, Dhoom and other films of the star. But it hasn't just stopped at that. David Warner Turns Hrithik Roshan in Latest Instagram Video, Yuvraj Singh Reacts.

David Warner has now recreated scenes from Shah Rukh Khan's film Don 2. He posted a video where his face can be seen morphed onto SRK's body. The cricketer clubbed many iconic scenes from the film to make this hilariously cool clip. Jokingly, David also apologised for all the violence in the clip and added that his followers would have a hard time guessing who the actor is. Earlier he had done the same with Aamir Khan's film Thugs Of Hindostan and we think David is liking the ReFace application a lot which allows him to morph his face onto different actors' body.

His fans were in for yet another treat and after watching the video they could not help but drop comments on his video. While a user asked if the fans would get to a collab between Shah Rukh Khan and Warner, another user asked him to come to India and try his luck in Bollywood movies. Warner had one used Prabhas as his inspiration for his photo as well and made his fans go crazy over him comparing himself with Prabhas' character from Baahubali. David Warner Shares Picture of Himself and Prabhas in Baahubali Costumes, Asks Fans Whose Attire Is Better.

Well, this is not the first time Warner has taken social media by storm with his funny videos. He has been ruling the internet space ever the cricket action came to a halt earlier this year due to COVID-19 virus. The opener shared one intriguing video after another and emerged as one of the popular Tiktok users. Knowing his massive fan-following in India, the 34-year-old shared many videos while grooving over Hindi, Telugu and Tamil songs.

(The above story first appeared on LatestLY on Dec 23, 2020 07:40 PM IST. For more news and updates on politics, world, sports, entertainment and lifestyle, log on to our website latestly.com).