David Warner Shares Picture of Himself and Prabhas in Baahubali Costumes, Asks Fans Whose Attire Is Better (See Post) 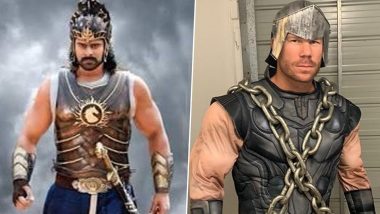 David Warner seems to have become obsessed with the outfit of the protagonist from the blockbuster movie Baahubali. Warner, who has been entertaining his fans with some extremely funny videos on TikTok, had recently mimicked Baahubali in one of his TikTok videos. In that video, Warner had attempted to repeat a famous dialogue from the Magnum Opus. On Thursday, Warner once again hit his Baahubali mode and uploaded a collage asking fans to compare and decide whose costume looked better – Prabhas or his. With cricket events suspended due to the global pandemic crisis, Warner has swapped his cricket bat for a phone and has been uploading regular videos on TikTok to entertain the fans. David Warner in Different Avatars: Australian Batsman Chooses His Favourite Cricket Format in This Latest TikTok Video.

In the picture on his Instagram Page, Warner posted a collage and asked fans to compare two costumes and decide whose one was better. In the first, actor Prabhas can be seen in Baahubali costume while in the next Warner can be seen in his ‘makeshift’ Baahubali costume. Prabhas’ costume is more a king’s war attire and has an armour covering the chest while he also has a sword tied to the hip belt. Warner, on the other, is wearing a makeshift costume using chains. David Warner Continues to Bedazzle Fans With His Hilarious and Cool Videos on TikTok.

David Warner or Prabhas as Baahubali?

“Who’s costume do you prefer?” Warner captioned the image and even tagged the official Instagram page of the Baahubali franchise. He also used “#bahubali” and ‘#Prabhas’ hashtag while asking fans to compare the costumes. Take a look at an earlier video where Warner mimicked Prabhas' Baahubhali dialogue.

Meanwhile, under normal circumstances, Warner would have been leading the Sunrisers Hyderabad in IPL 2020. Warner, who was dropped as the captain of the franchise for a year due to a 12-month ban, was named the captain for the 13th edition of the T20 tournament. But the lucrative tournament was indefinitely suspended by the BCCI due to the coronavirus pandemic and the nationwide lockdown.

(The above story first appeared on LatestLY on May 28, 2020 01:59 PM IST. For more news and updates on politics, world, sports, entertainment and lifestyle, log on to our website latestly.com).