A Fan asks Sonu Sood to Give Him a PS4, Actor Denies and His Reason for Denying Will Warm Your Hearts

A fan recently asked Sonu Sood to buy him a PS 4. The actor obviously denied but the reason behind his denial was truly heartwarming. 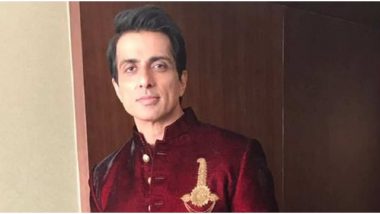 While Sonu Sood is out there helping migrants find new employment opportunities and helping the stranded students return to India, a fan recently asked him to give him a PS4. For the ones who don't know, it's a gaming console by Sony whose price ranges from Rs 24,000 - 27,000. A fan recently took to his Twitter account to request Sonu Sood to buy the gaming console for him but Sood denied for reasons valid enough. In fact, his reply won our hearts and we suggest you take a look at how much sense did it make. Little Girl Requesting Sonu Sood to Send Mom to Granny's Home on Father's Request Goes Viral, 5 Instances When Bollywood Star Wittily Tackled Hilarious Requests Online.

"If you don’t have a PS4 then you are blessed. Get some books and read. I can do that for you," replied Sonu to his fan asking for a PS 4. Didn't he make sense? We're glad for the actor decided to help the kid in his own way and not simply give in to his demand or query. We wonder if his young fan will understand the importance of the actor's message and if he does, we hope he implements on it. Sonu's list of admirers is increasing at a steady pace and he should be lauded for emerging as a messiah during these trying times. Sonu Sood Reveals the Cost of One Bus to Send Migrants Home, Says It's Somewhere Between Rs 1.8 to 2 Lakh.

After helping migrants reach their homes, the actor also provided a tractor to an Andhra Pradesh based family. A video of two sisters manually ploughing the field had recently gone viral on social media, post which, Sood helped them by sending in a tractor. The actor even reached out to actor Anupam Shyam, a famous actor who was hospitalised but had money to bear his medical expenses. Sood is helping humanity in the best way possible and here's cheering for him from the top of our lungs.

(The above story first appeared on LatestLY on Aug 06, 2020 04:42 PM IST. For more news and updates on politics, world, sports, entertainment and lifestyle, log on to our website latestly.com).