The Big Bull trailer starring Abhishek Bachchan as the protagonist was released. Since then Twitter has been abuzz with comparisons with Scam 1992. Most of the netizens believe they cannot adjust to a new Harshad Mehta after watching the brilliant Pratik Gandhi in the same role. 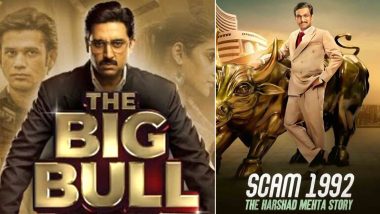 Disney+Hotstar announced a gamut of movies last year that skipped theatres for an OTT release, all thanks to the dreadful coronavirus. The Big Bull was one of them. Post that there wasn't much chatter about the movies. It took March 2021 for the film to finally have a trailer. The Big Bull is yet another narration of Harshad Mehta's scam that rocked the nation in the 90s. Having watched convincing and highly stimulating content on the same in Scam 1992, comparisons were bound to follow. Twitter is filled with comments on the same which makes us believe netizens are still not over the Pratik Gandhi starrer.  The Big Bull Trailer Review: Abhishek Bachchan Looks Intriguing As A Stockbroker in This Upcoming Film Based on The 1992 Harshad Mehta Scam (Watch Video)

The Big Bull has Abhishek Bachchan playing Hemant Shah or the protagonist which was done by Gandhi in Hansal Mehta's version. So now Twitter is abuzz with there's only one Big Bull and that's Pratik Gandhi.

Check out the reactions on The Big Bull and Scam 1992

Why The Big Bull is underrated explained...

#TheBigBullTrailer is underrated and only reason behind it is #PratikGandhi's performance in #Scam1992, for me #TheBigBull is expectional but not comparatively to #Scam1992.

No one but Pratik Gandhi

But No one can beat @pratikg80 in playing Harshad Mehta.

Good luck to #bigbull though! pic.twitter.com/3RpAzRPirN

I can't imagine playing Harsad Mehta anyone else other than Pratik Gandhi even real Harshad Mehta wouldn't have played his role better. Than good Pratik Gandhi was.

The setting of Pratik Gandhi

It's the classic case of early movers' benefit. Since Scam 1992 released first, people are finding it difficult to adjust to a new Harshad Mehta. Hopefully, when the film releases on April 8, this reaction would change.

(The above story first appeared on LatestLY on Mar 19, 2021 12:43 PM IST. For more news and updates on politics, world, sports, entertainment and lifestyle, log on to our website latestly.com).