Amid Aryan Khan’s Drug Case, Shah Rukh Khan’s Doppelganger Raju Rahikwar Loses Work, Says ‘I Am Ready To Sacrifice My Work for Him’

Earlier on October 11 afternoon, it was revealed that Aryan Khan's bail plea to be heard in Mumbai sessions court today. SRK's son is allegedly involved in Mumbai's Cruise Drugs Case. 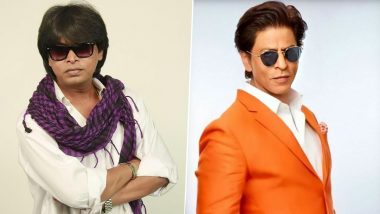 Shah Rukh Khan’s lookalike Raju Rahikwar is disappointed about SRK's son  Aryan Khan's arrest on cruise drugs case. Aryan was arrested on October 3 after the Narcotics Control Bureau (NCB) raided a Goa-bound cruise ship off the Mumbai coast and claimed to have recovered drugs from some persons. He is currently in judicial custody and lodged at the Arthur Road prison in Mumbai. Aryan Khan Drug Case: BYJU's Stops Roll Out of Ads Featuring Shah Rukh Khan - Reports.

In an earlier interview with media portal News18, Raju had stated that his fame was totally dependent on SRK's significance. While earlier, BYJU’S had also paused on advertisements featuring SRK following his son Aryan's arrest. Now, Raju’s work has also been hampered. Following the incident, Raju was quoted as saying to News18, "For almost a year and a half, I was out of work as there were no events happening due to the coronavirus." Amid Aryan Khan’s Drug Case, Writer Akhil Katyal’s Powerful Poem for Shah Rukh Khan Is Going Viral.

Raju added, "Things had just started looking good after the pandemic. I was supposed to be a part of a birthday party on October 10 in Jaipur. A week later I had to attend a social gathering in the same city. But both the events have been cancelled. The organisers told me, ‘people aren’t comfortable with SRK’s current image.’ It’s a matter of time. I am sure Shah Rukh bhai will come out stronger."

Raju further said, "I am going to request the school authorities to give time till December. I don’t have any complaints against him. I am ready to sacrifice my work for him. My identity is because of Shah Rukh bhai. Whatever I have today is because I look like him. He is my God. Right now his family is in pain and I can feel the same. I just want Aryan bhai to come back home."

Raju is popularly known as Junior SRK, feels that the superstar’s family is targeted and said, "I don’t understand the reason why Aryan bhai is kept in jail. Also, there are around eight people who are arrested but the only name that they are interested is Aryan Khan just because he is Shah Rukh Khan’s son. They don’t have any proof and clearly, there is something that is not right. They are playing around with Aryan bhai’s future. He is just a kid and deserves a chance. He should be allowed a fair trial."

Apart from Raju, Haider Maqbool, who is also a SRK’s doppelganger, is feeling the heat as his professional front has been affected too following the arrest of Aryan. Haider was also quoted by News18 as he said, "I was supposed to make a couple of appearances in the next two weeks but everything has been put on hold. I don’t mind it because I credit my success to Shah Rukh bhai and I need to stand with him during his tough time. I am very disappointed with whatever is happening. Shah Rukh bhai is suffering a lot and I just pray that Aryan comes back home soon."

Earlier on Monday (October 11) afternoon, a special court here revealed that it would hear the bail application of SRK's son Aryan, arrested in connection with the seizure of banned drugs onboard a cruise ship, on October 13 and directed the Narcotics Control Bureau (NCB) to file its reply on that date.

(The above story first appeared on LatestLY on Oct 11, 2021 08:08 PM IST. For more news and updates on politics, world, sports, entertainment and lifestyle, log on to our website latestly.com).