With theatres reopening, Bollywood announced a host of big films for theatrical release over the next months. However, with the latest surge in Covid cases, multiple films are now being postponed. Here's a quick check on the films being postponed for now. 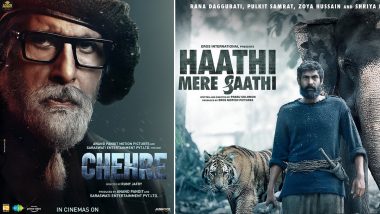 With theatres reopening, Bollywood announced a host of big films for theatrical release over the next months. However, with the latest surge in Covid cases, multiple films are now being postponed. Among the most-hyped films being pushed for now is the Amitabh Bachchan-Emraan Hashmi starrer Chehre, which was scheduled to arrive on April 9. The Rani Mukerji-Saif Ali Khan starrer Bunty Aur Babli 2 will not be releasing on its scheduled date, April 23, either. Chehre: Amitabh Bachchan-Emraan Hashmi Starrer Gets Postponed; New Release Date Yet To Be Finalised.

The Rana Daggubati-starrer Haathi Mere Saathi (originally slated for March 26), has also been pushed for now despite its Telugu version Aranya and Tamil version Kaadan having opened on the designated date. Ram Gopal Varma's "D Company" and the Punjabi biggie Puaada, starring Ammy Virk and Sonam Bajwa, are also awaiting new release dates now. A rough film trade estimate suggests Rs 105 crore is at stake with these projects getting delayed. Rana Daggubati’s Haathi Mere Saathi Release Date Postponed Due to COVID-19; Tamil Version Kaadan To Come Out on March 26 Itself.

Trade analyst Atul Mohan agrees that the delay is going to cost filmmakers money. "These films have been promoted heavily but are not releasing. Now whenever the new release date is decided, they would have to be promoted again. Also, the makers have to bear the interest of these investments on these projects," he says. However most in the trade feel this is the only way out for now.

"The film industry is already bleeding, but health is most important and producers are realising this. Also, because of night curfew in Maharashtra, theatres can't have shows beyond 8pm. Delaying the release is a step in the right direction," says trade analyst Taran Adarsh.

Talking about the decision to delay his film's release, Chehre producer Anand Pandit said in a statement: "Considering the situation and safety of our audiences and fans which is of utmost importance to us, we have decided to postpone our film Chehre. The team has taken immense efforts to make it a great cinematic experience and we are looking forward to our audiences coming to the theatres safely,"

A statement put out by the Haathi Mere Saathi team read: "Dear viewers, It pains us to share this news but given the Covid-19 situation in the Hindi markets, the team of Haathi Mere Saathi has decided to hold on to the release of the film. We shall keep you posted on further developments. However, we will be releasing Aranya and Kaadan in the South markets on the 26th of March." Here's a quick check on the films being postponed for now:

The Rana Daggubati starrer was slated to hit screens on March 26. However, it has been postponed due to the rising Covid cases, particularly in Mumbai. However, the Tamil and Telugu versions, Kaadan and Aranya, have released as per schedule.

The follow-up to the 2005 hit Bunty Aur Babli was expected to hit screens on April 23. However, it was been postponed indefinitely. The film stars Rani Mukerji, Saif Ali Khan, Siddhant Chaturvedi and Sharvari Wagh.

The release of Ammy Virk and Sonam Bajwa-starrer Punjabi rom-com was originally set to happen in June last year, but was delayed because of the pandemic. Two release dates have since been announced -- March 11 and April 2. However, the film has been deferred again, from its April 2 date.

Ram Gopal Varma's new gangster drama has also been pushed for release. The filmmaker recently took to Twitter to announce the news.

(The above story first appeared on LatestLY on Mar 30, 2021 05:29 PM IST. For more news and updates on politics, world, sports, entertainment and lifestyle, log on to our website latestly.com).