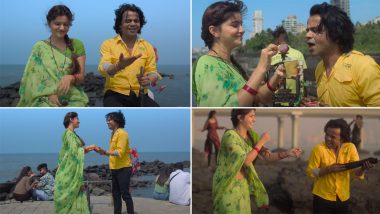 The makers of Rubina Dilaik-starrer Ardh have released the first song titled "Ishq Ka Manjha" on Sunday, on the birthday of the debutant director of the film Palaash Muchhal. The heartfelt romantic number is sung by the renowned singers Armaan Malik and Palak Muchhal, who also penned the beautiful lyrics of the song. The song aptly captures the cute chemistry and the feelings of a married couple featuring Rubina Dilaik and Rajpal Yadav. Ardh: Rubina Dilaik’s Striking First Look As Madhu From Her Debut Film Out! (View Pic).

The song and the video depict the innocence and togetherness of the characters, where Rajpal Yadav realises that he has never taken his wife out, so he takes her out to spend quality time together. Ardh Trailer: Rajpal Yadav, Rubina Dilaik, Hiten Tejwani, Kulbushan Kharbanda’s Family Entertainer To Premiere On ZEE5 On June 10 (Watch Video).

On being asked about the film and the song, Muchhal said: "This song is very close to my heart and Armaan Malik and my sister Palak Muchhal have beautifully brought out the emotions of the song and offers a soothing melody to our musical ears. This is my debut feature film and I hope audiences fall in love with it as they did with my songs till now."

"This is Rubina and my debut film and audiences will witness a new avatar of sir Rajpal Yadav and sir Kulbhushan Kharbanda. I am nothing but grateful that we have decided to work together to bring out this magic called ARDH."

Talking about the film, Rubina said: "This is my debut film and my first step in the film journey. I am thrilled, nervous, and feeling grateful at the same time. Palaash is very well equipped with the nuances of the craft and knew what he exactly wanted from his actors."

"It was lovely working with amazing actors like Rajpal Ji, Kulbhusan Ji, and Hiten. We have put all our effort into making this song as well as this film great and now we are eagerly waiting to know the reaction of the audience." Ardh is slated to release on ZEE5 on June 10.

(The above story first appeared on LatestLY on May 22, 2022 04:48 PM IST. For more news and updates on politics, world, sports, entertainment and lifestyle, log on to our website latestly.com).