The much-awaited song Crazy Habibi VS Decent Munda from Arjun Patiala is out! Sunny Leone and Diljit Dosanjh have burned the dance floor in this party song. 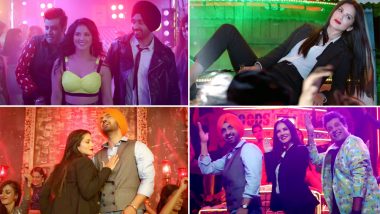 "Crazy Habibi VS Decent Munda" is crooned by Guru Randhawa and it is composed by Sachin-Jigar. In an interview to Bombay Times director stated, “The song is a crazy dance number. It’s for all the crazy habibis and decent mundas. The foot-tapping track has an underlying humour to it, and is an out-and-out club number. We had a blast shooting. The most fun thing was dressing Diljit Dosanjh and Varun Sharma in crazy costumes. Sunny Leone is, of course, fabulous, like she always is. Her dance moves in the song are to watch out for.” This song is undoubtedly the ultimate party number of the year and fans are truly going to love watching Sunny's simple yet cool dance moves. Main Deewana Tera Song from Arjun Patiala: Kriti Sanon, Diljeet Dosanjh and Varun Sharma Recreate Ranbir Kapoor's Iconic Badtameez Dil Step (Watch Video).

The song "Crazy Habibi VS Decent Munda" is choreographed by Vijay Ganguly. Sunny Leone's dance moves are not just cool but her indo-western outfit goes perfectly with the song. Talking about the film Arjun Patiala, it also features Kriti Sanon in the lead. This comedy drama features Diljit Dosanjh as a cop, Kriti as a reporter and Varun Sharma as a hawaldaar. The film is all set to hit the screens on July 26! Share your thoughts with us about the song in the comment section below.

(The above story first appeared on LatestLY on Jul 03, 2019 11:40 AM IST. For more news and updates on politics, world, sports, entertainment and lifestyle, log on to our website latestly.com).