Atrangi Re: Sara Ali Khan Reveals She Used To Stalk Akshay Kumar While Shooting for Their Film!

Actress Sara Ali Khan on Saturday revealed that she used to stalk superstar Akshay Kumar while shooting their upcoming film Atrangi Re! Sara took to Instagram to talk about the Aanand L Rai directorial that has just concluded shooting. 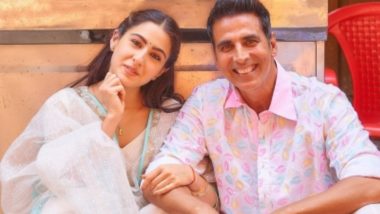 Actress Sara Ali Khan on Saturday revealed that she used to stalk superstar Akshay Kumar while shooting their upcoming film Atrangi Re! Sara took to Instagram to talk about the Aanand L Rai directorial that has just concluded shooting. She shared stills from the set on Instagram along with her post, too. Atrangi Re: Is Akshay Kumar Playing a Magician in Aanand L Rai's Film? Actor Shares Intriguing Picture on Last Day of Filming.

"That's a film wrap. Ek saal baad. Thank you so much @aanandlrai sir for giving me this role, this film and this opportunity. But more than that thank you for your unconditional love, unwavering support, the best India darshan, delicious khana, early morning sunrise drives to location, sufi ginger water evenings, and the most memorable year with the best team," she wrote. Aanand L Rai Poses with ‘Atrangi Re Warriors’ After Wrapping Up Delhi Schedule of Akshay Kumar Film.

"Atrangi Re" also stars Dhanush. Tagging the Tamil star, Sara shared: "@dhanushkraja thank you for always being helpful, motivating and inspiring. Couldn't have asked for a better partner in this journey and yes thank you for introducing me to your amazing music and mouth-watering varieties of South Indian food (even though we could've avoided that indulgence during shoots)."

Apologising for stalking Akshay Kumar, Sara added: "Thank you so much @akshaykumar sir for bringing so much love, laughter, energy and positivity on our set and sorry for stalking you for photos in all our costumes sir." Atrangi Re went on floors in March 2020, in Varanasi. The team resumed shoot post lockdown in Madurai, followed by schedules in Delhi and Agra. The film is slated to release on August 6.

(The above story first appeared on LatestLY on Mar 27, 2021 09:40 PM IST. For more news and updates on politics, world, sports, entertainment and lifestyle, log on to our website latestly.com).