It is interesting to see that a movie starring an A-lister is being trounced at the box office, by a movie with less-popular stars, that too in its second week run. 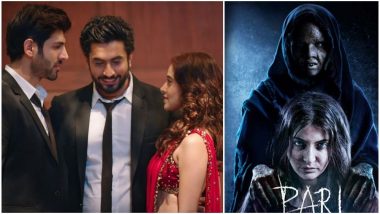 It is interesting to see that a movie starring an A-lister is being trounced at the box office, by a movie with less-popular stars, that too in its second week run. But, by calling them  less popular, we are in no way trying to demean the talents of Kartik Aaryan, Nushrat Bharucha and Sunny Singh, easily the best things about the fairly amusing Sonu Ki Titu Ki Sweety (along with scene-stealing Alok Nath and Virendra Saxena). We really want to see them in more movie, outside the Luv Ranjan territory in good lead roles, rather than playing a star kid's BFF or in travesties like Guest Iin London.

Sonu Ki Titu Ki Sweety is doing really good business even in its second week, turning out to be a true hit of 2018 after Padmaavat. The movie has collected Rs 70.67 crore till Tuesday, as per trade analyst Taran Adarsh

On the other hand, Anushka Sharma's Pari, despite getting good reviews, might have been too scary enough for its own good. The movie has only managed to collect Rs 19.35 crore at the domestic box office. Reportedly made on a budget of Rs 30 crore, Pari needs to make at least Rs 40 crore to break-even. On Tuesday, the movie made Rs  1.87 crore only whereas Sonu Ke Titu Ki Sweety made Rs 2.62 crore.

With three more Bollywood movies coming out this week (Hate Story 4, 3 Storeys, Dil Juunglee), Pari might not be able to sustain at the box office. Too bad!

(The above story first appeared on LatestLY on Mar 07, 2018 08:07 PM IST. For more news and updates on politics, world, sports, entertainment and lifestyle, log on to our website latestly.com).